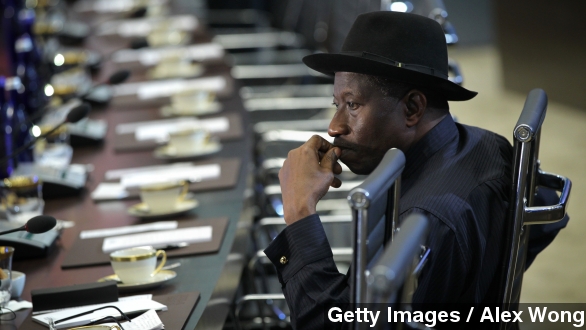 Just ahead of the Nigerian election, President Goodluck Jonathan is calling for an increase in U.S. aid to fight terrorist group Boko Haram.

Nigerian President Goodluck Jonathan is making the case for U.S. intervention against terror group Boko Haram in his country's north.

The group poses the biggest threat facing his re-election, with the country heading to the polls in late March, after two delays. (Video via CCTV)

Jonathan made his comments in an interview with The Wall Street Journal, asking the paper: "Why can’t they come to Nigeria? ... They are our friends. If Nigeria has a problem, then I expect the U.S. to come and assist us."

But relations between the U.S. and Nigeria have been complicated at best, with the issue of Boko Haram driving the division.

The group has stepped up its attacks within the country, employing suicide bombings and mass kidnappings but also expanding into neighboring Cameroon and Chad. (Video via France 24)

Still, as Foreign Policy points out, Jonathan has been sending mixed signals. He says he wants military aid but recently canceled an "American-run training program for a Nigerian battalion charged with battling the terrorist organization."

U.S. Africa Command has played an important role in training African military units, as well as collaborating with Ugandan forces in the hunt for the Lord's Resistance Army, an infamous militant group. (Video via U.S. African Command)

The U.S. has been more reluctant in giving aid to Nigeria because, as that Foreign Policy article points out, the country's military has a questionable human rights record.

Securing U.S. aid could present a big boost in the polls for Jonathan, whose opponent, a former dictator, has a military background that some think will help in the fight against the group.