Nike Says Kyrie Irving Is No Longer One Of Its Athletes 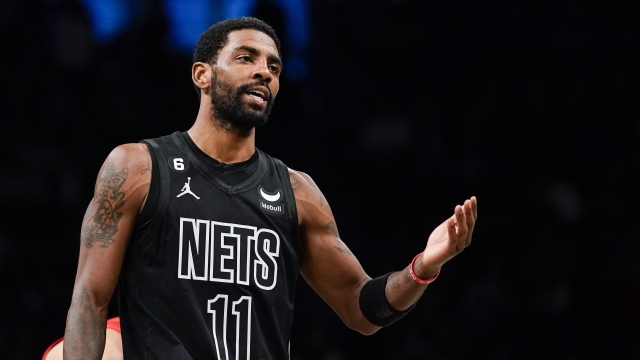 The Brooklyn Nets guard has faced backlash for tweeting a link to an Amazon documentary containing antisemitic material.

Kyrie Irving’s relationship with Nike is officially over, the shoe and athletic apparel maker said Monday, a move that comes a month after the company suspended its dealings with the Brooklyn guard as part of the fallout over his tweeting a link to a film containing antisemitic material.

It was not a surprise breakup, especially after Nike co-founder Phil Knight said in the days after the company suspended Irving that he had doubts there would be any reconciliation.

“Kyrie Irving is no longer a Nike athlete,” the company said in a statement.

Celebrities and Jewish groups are urging Amazon to stop selling the book and film 'Hebrews to Negroes: Wake Up Black America.'

Irving’s agent and stepmother, Shetellia Riley Irving, told The New York Times that the sides “mutually decided to part ways and we just wish Nike all the best.” Irving, without mentioning Nike by name, appeared to address the matter on his Twitter account Monday afternoon.

“Anyone who has even spent their hard earned money on anything I have ever released, I consider you FAMILY and we are forever connected,” the Nets guard wrote. “it’s time to show how powerful we are as a community.”

Irving has been wearing his signature line of Nike in recent games. It’s unknown if the formal ending of his relationship with Nike will affect that, at least in the short term. He had been a Nike athlete for the entirety of his NBA career, starting in 2011, and got his first signature shoe with the company in 2014.

When Nike suspended its relationship with Irving in early November, the company was just days away from releasing the Kyrie 8, what would have been the latest in his signature line.

“At Nike, we believe there is no place for hate speech and we condemn any form of antisemitism,” the Beaverton, Oregon-based company said at the time.

The Brooklyn Nets has suspended player Kyrie Irving for posting a link to a documentary containing antisemitic comments.

Irving missed eight games before being reinstated by the Nets on Nov. 20. He apologized that day to those who felt threatened or hurt when he posted a link to the documentary, and acknowledged that he should have handled earlier chances to clarify whether he has antisemitic beliefs differently.

“I don’t stand for anything close to hate speech or antisemitism or anything that is going against the human race,” Irving said on the day the Nets reinstated him.

Irving has expressed no shortage of controversial opinions during his career. He repeatedly questioned whether the Earth was round before eventually apologizing to science teachers. Last year, his refusal to get a COVID-19 vaccine led to him being banned from playing in most of the Nets’ home games.