No Agreement Yet From Trump, Bipartisan Lawmakers On Border Security 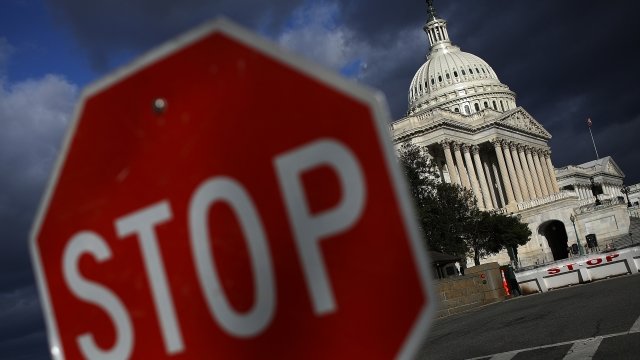 A briefing at the White House on Wednesday didn't appear to yield any progress on ending the partial government shutdown.

It looks like lawmakers are back to the drawing board when it comes to making a deal on border security and ending a partial government shutdown.

After sitting down with bipartisan congressional leaders at the White House Wednesday, President Donald Trump invited the group to back to continue their discussion on Friday.

Negotiations to reopen part of the government have been frozen for several days, and border wall funding is the big sticking point.

Earlier this week, House Democrats unveiled a plan to end the shutdown — but it doesn't include the $5 billion President Trump requested for a wall along the U.S.-Mexico border.

Lawmakers at Wednesday's briefing indicated there wasn't any real progress made.

"Both sides can sit down, find a compromise that actually secures the border. We had everybody in the room say they want a secure border. So maybe we work a combination to make it solved," McCarthy said.

Senate Minority Leader Chuck Schumer floated the idea of reopening the government while the two sides continue to hash out border security.

"Open up the government, as we continue to debate what is the best way to secure our borders," he said.

"As long as it takes. I mean, look, I'm prepared. I think the people of the country think I'm right," Trump said.

Democrats are expected to vote on that spending package after they assume control of the House on Thursday, even though the Republican-controlled Senate has said it won't rubber stamp anything the president doesn't approve of.