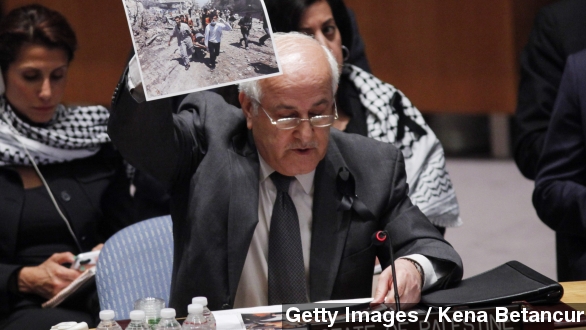 Earlier Tuesday, the UN Security Council rejected a Palestinian statehood resolution that no one really expected to pass.

This means — theoretically — it could push for war crimes charges against Israel, whose prime minister has called his army "the most moral army in the world." Israel's Benjamin Netanyahu is vowing retaliation for the move but isn't specifying what that would look like.

"I have news for the Palestinians: You cannot agitate and provoke your way to a state," Israeli delegate Israel Nitzan said in a statement aired by The Guardian.

The U.S. and Australia voted against the resolution. It needed nine votes from the council for approval but only got eight. (Video via Euronews)

But even if it had gotten the nine votes, the U.S. held veto power and likely would have used it (though it really didn't want to have to do that), so no one truly thought the resolution had a shot. It would have been more about forcing the U.S. into an uncomfortable position of using the veto.

U.S. Ambassador to the UN Samantha Power called it "deeply imbalanced" but also warned against viewing the resolution's failure Tuesday "as a victory for an unsustainable status quo."

Instead, the U.S. has been encouraging negotiations through peace talks. (Video via Fox News)

"The repeated request for us to wait and wait and wait … must understand that such requests are not viable," said Palestinian Authority delegate Riyad Mansour.

France — which earlier this year symbolically voted to recognize Palestinian statehood — is one Western country that voted in favor of the resolution. Russia and China also supported it.

The draft, which Jordan sponsored, also called for Israel to completely withdraw from the occupied West Bank and East Jerusalem within three years.