No, The Amazon Rainforest Doesn't Produce 20% Of The World's Oxygen 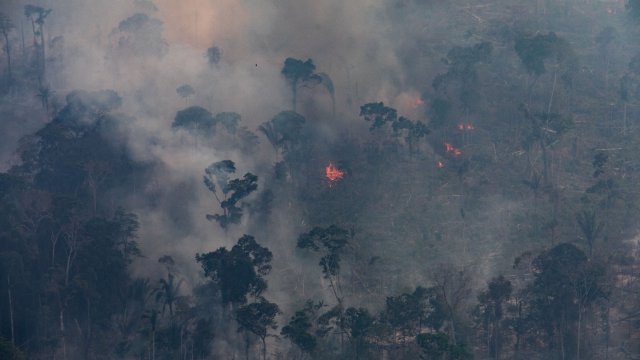 There are plenty of reasons to be worried about the blazes burning in the Amazon rainforest, but our oxygen supply isn't one of them.

"The Amazon basin is, of course, known as the lungs of the world. It provides 20% of the oxygen for the entire planet," CNN anchor Robyn Curnow said.

It's a stat that's been repeated countless times by journalists, celebrities and politicians alike as fires in the Amazon rainforest continue to burn.

But it's actually not true. The Amazon rainforest doesn't produce 20% of our planet's oxygen. And while there are plenty of reasons to be worried about the fires, our oxygen supply isn't one of them.

In fact, the world's oxygen levels are pretty stable. Experts say there's enough of it in the air to last millions of years. And those levels aren't dependent on rainforests — most of the oxygen we breathe actually originated in the oceans.

Here's where the misunderstanding comes from: Almost all of the free oxygen in the air is produced by plants through photosynthesis. And it's true that a significant chunk of land photosynthesis happens in tropical rainforests.

But pretty much all photosynthesis-generated oxygen is used up by microbes decomposing dead plant material. So in the end, it balances out — forest plants produce a lot of oxygen, and forest microbes consume a lot of oxygen.

Scott Denning, a professor of atmospheric science at Colorado State University, put it this way: "Even if all organic matter on Earth were burned at once, less than 1% of the world’s oxygen would be consumed."

Newsy spoke with Denning about that 20% figure. He said: "This is not a crisis of oxygen. Burning the forests in the Amazon is a bad thing. It destroys forests, it destroys ecosystems, it puts people out of homes, and it's causing air pollution. It's causing CO2 to go up. But we really don't need to be worried about the lack of oxygen because of these fires."

Experts also say deforestation in general is a major concern. According to preliminary data from the government's satellite monitoring agency, the Brazilian Amazon lost 430 square miles of forest so far in August. And that doesn't include fire damage.