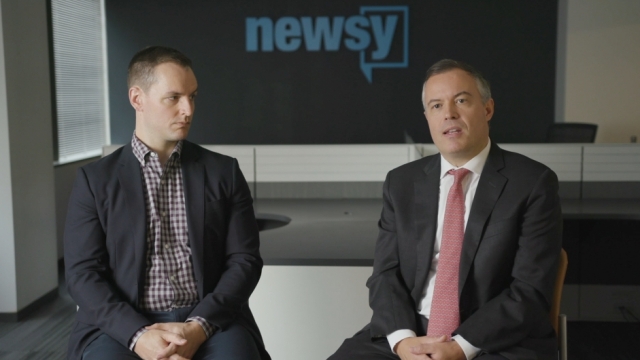 Former Clinton and Romney campaign managers are working together on a bipartisan effort to thwart cyber threats for federal campaigns.

"What Matt and I experienced on our campaigns were foreign adversaries, probably the most capable cyber operators on the planet, attacking our campaigns and we didn't have resources to confront that," said Robby Mook.

Two former presidential campaign managers have teamed up in a new initiative to tackle cybersecurity issues during the 2020 election.

Robby Mook served on Hillary Clinton's campaign in 2016 and Matt Rhoades worked on Mitt Romney's 2012 campaign. Together, they serve on the board of a bipartisan service that helps candidates take on cybersecurity issues.

"The two of us testified in front of the FEC to get a special waiver so that we could provide in kind cybersecurity  advice and services to Republican and Democratic campaigns all across the country," said Matt Rhoades.

Defending Digital Campaigns coordinates with several technology companies to provide cybersecurity products like anti-phishing protection or secure messaging platforms. Those services are provided to political campaigns of any party at low to no cost.

Digital security isn't a hypothetical threat to Rhoades and Mook: Romney's 2012 campaign was targeted by Chinese hackers, and Clinton's 2016 campaign was plagued by Russia's digital meddling.

But as critics point out, the idea hinges on companies donating services to political campaigns — something that's against FEC rules for good reason.

"For decades there have been laws that prohibit corporations from giving free things to candidates to their campaigns because the potential for corruption that you would see if corporations could give their services or products for free to people who are running for political office," said Adav Noti, who is the chief of staff and senior director for trial and litigation at the Campaign Legal Center.

The organization eventually received a waiver from the FEC to provide its services. After months of review.

Other groups have also tapped into the exemption, including an organization led in part by former Homeland Security Secretary Jeh Johnson and former Director of National Intelligence James Clapper.

To address the criticism Rhoades says they are putting out as much info as possible.

"And some of the ways in which we're going about in doing it in a way that is transparent as possible to deal with some of these critics is through disclosing who our donors are, talking about the companies who are providing these in kind services and being very up front about it," Rhoades added.

While presidential campaigns could certainly use the assistance Defending Digital Campaigns provides, both men say their efforts are primarily focused on campaigns that don't have a significant amount of resources.

"Matt and I say this all the time. We don't agree on a lot but what we both agreed on and what I think a lot of Democrats and Republicans agree on is we're in this together and we want American voters deciding our elections," Mook said.