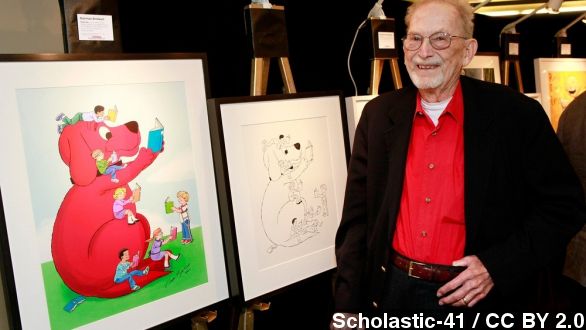 Writer and illustrator Norman Bridwell, best known as the creator of the children's book series 'Clifford the Big Red Dog,' has died at the age of 86.

Norman Bridwell, best known as the creator of the children's book series "Clifford the Big Red Dog," has died. He was 86.

According to his publisher, Scholastic, Bridwell died Friday at his home in Martha's Vineyard, Massachusetts. The cause of death was not released.

Scholastic first published Bridwell's extensive "Clifford" series more than 50 years ago. Since then, it's reportedly sold more than 129 million copies in 13 different languages.

Scholastic's CEO released a statement saying, "Norman Bridwell's books about Clifford, childhood's most loveable dog, could only have been written by a gentle man with a great sense of humor."

Bridwell was also quite tenacious to get the book published in the beginning. "Clifford" was rejected by nine publishers before Scholastic finally gave it the green light.

The gigantic friendly canine even wound up as a PBS cartoon using the same name.

"Clifford" also made his debut on the big screen in 2004, and there's another movie in the works that's due out in 2016.

Bridwell completed two more "Clifford" books before he passed: "Clifford Goes to Kindergarten" and "Clifford Celebrates Hanukkah." Both are due out next year.

Norman Bridwell said, "I feel very fortunate in this part in teaching children to read. Something I didn't plan but it's worked out that way."