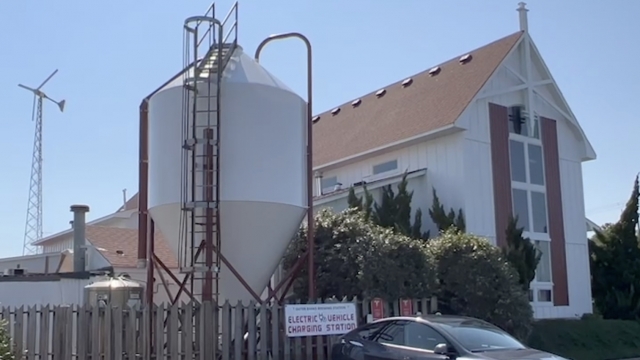 Outer Banks Brewing Station is taking a tip from the Wright brothers and the winds they used to power the world's first plane.

Kill Devil Hills sits on North Carolina's outer banks. The island has constant strong winds, which is why Orville and Wilbur Wright traveled from Ohio to the small town to test and eventually fly the world's first airplane.

Just four blocks from that historic site is the Outer Banks Brewing Station.

Eric Reece and his business partner own it. It's one of the largest breweries in the area. He's proud of his homemade beer.

He's also just as proud of his 10 kilowatt wind turbine that helps power the brewery.

"This place sucks down a lot of power," Reece said. "Every time the wind blows, we start drawing that power."

It's been one of his long-term plans since he opened the brewery more than 20 years ago. At first, local politicians were hesitant, so Reece educated them about beer and wind turbines.

"At the end of the day, we need alternative energy sources," he said.

Opponents didn't think the wind was strong enough for it to create power.

That's when he reminded everyone about the Wright brothers and the winds they used to power the world's first plane.

Once the turbine went up, it became a big tourist attraction. Not as big as the Wright brothers' memorial or the beaches, but it drew a crowd.

"The school started bringing busloads of kids," Reece said. "People started parking in the parking lot when we were closed just to hear it."

Despite North Carolina's strong winds, there's only one commercial wind project in the state.

Reece's private turbine provides about 10% of the power he needs to brew beer. But it's making a bigger impact educating neighbors, politicians and tourists on the power of the wind.