North Carolina Teachers Will Be The Next To Walk Out 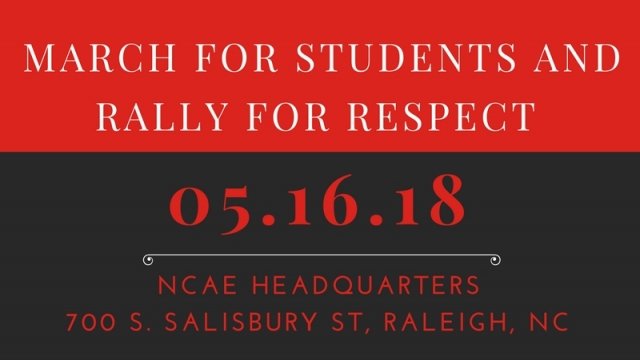 Teachers plan to walk out on May 16 — but this won't be exactly like teacher protests we've seen in other states.

Teachers in North Carolina are the latest group planning to leave their classrooms to protest low salaries and inadequate school funding.

Hundreds of schools there are expected to close on May 16 while teachers participate in the March for Students and Rally for Respect campaign in Raleigh, the state's capital.

But there are some differences between the North Carolina protest and some of those we've seen in recent months. For one, the teachers aren't on strike — they're taking a personal day. And there's a definite ending to the demonstration. Teachers plan to return to their classrooms the next day.

May 16 is also the day the state's legislature comes back into session. Teachers plan to rally and make appointments with their local representatives.

Teachers in North Carolina are paid nearly $10,000 a year less than the national average, according to Rally for Respect.