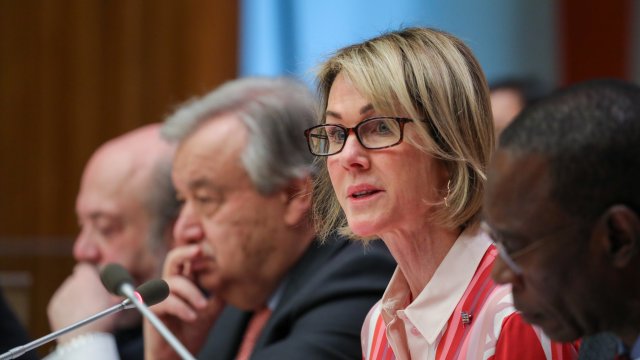 North Korea says the U.S.'s comments spurred the country to "make a definite decision on which way to choose" ahead of a year-end deadline.

U.S. Mission to the United Nations

North Korea accused the U.S. of "hostile provocation" on Thursday after it criticized the North's ballistic missile tests.

On Wednesday, the U.S. Ambassador to the U.N. Kelly Craft told the Security Council that the U.S. is ready to be flexible with North Korea to achieve peace in the region. But, she also called the North's ballistic missile tests "deeply counterproductive."

North Korea's foreign ministry called the comments "foolish," saying they spurred the country to "make a definite decision" ahead of a year-end deadline set by Pyongyang for the U.S. to make concessions in nuclear talks.

North Korea said earlier this month it was up to Washington to decide what "Christmas gift" it will receive from the country at the end of the year.

North Korea's ambassador has said American attempts to engage in a "sustained and substantial dialogue" with the country are a "trick" intended to benefit the U.S.'s "domestic political agenda."