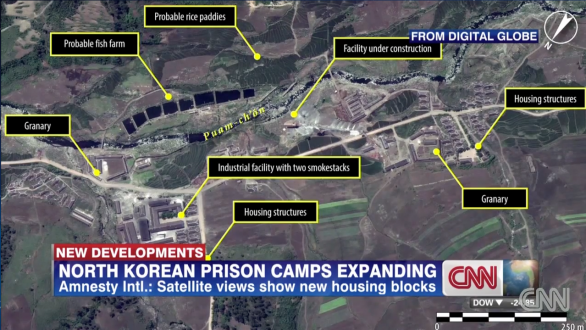 "The group announced Thursday that these satellite images, taken a few years apart, show Pyongyang is continuing to fund and develop these camps for political prisoners. The regime denies these prisons even exist." (Via CNN)

"It's thought that up to 200,000 prisoners, including children, are being tortured and executed." (Via ITN)

Amnesty International analyzed two camps, one of which is three times the size of Washington D.C. Very little is known about the compounds. (Via The Telegraph)

"Information about these camps comes from the few prisoners who managed to escape the camp and the country. They speak of torture, starvation and death being a fact of life." (Via WXXA)

​​The human rights group gathered evidence from inmates who have gotten out and former guards who have never spoken publicly before. One released prisoner told Amnesty International:​ "Upon arrivng in Yodok, it felt like the sky was collapsing. I couldn't understand how this could happen to me. How can I be taken to such a deplorable place?"

One former prison official identified only as Mr. Lee says, "The purpose of prison camps is to oppress, degrade, and violate the inmates for as long as they are alive." (Via NBC)

Mr. Lee said women were regularly raped, then executed to keep it a secret and described prisoners struck in the neck by hammers, strangled and beaten to death with wooden sticks. (Via Daily Mail, Express.co.uk, International Business Times)

Amnesty International's report says many prisoners are simply family members of those convicted. "They are detained as a form of collective punishment, 'guilt-by-association.'"

The group turned over evidence to the United Nations' Commission of Inquiry and is asking for the immediate release of all prisoners and closure of the camps.