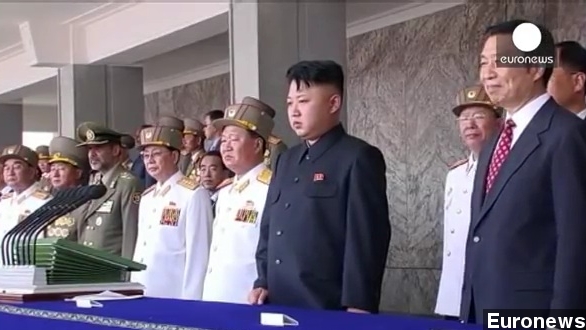 Via fax, North Korea threatened to attack South Korea without warning in response to protests in Seoul this week.

North Korea warned South Korea Thursday it would attack the country "without notice" in response to protests in Seoul this week. And that warning came via a pretty old-school means of communication.

"North Korea making a new round of threats to South Korea. That's nothing new, but this time, they're using a fax machine." (Via WHEC)

A ministry spokesperson told The Wall Street Journal the fax said North Korea would strike if "the provocation against our highest dignity is to be repeated in the downtown of Seoul."

That threat is in reference to several conservative groups that held demonstrations in Seoul on the second anniversary of the death of former North Korean leader Kim Jong-iI. (Via Daily Mail)

CNN reports protesters burned effigies of North Korean leaders as well as its flag, and the footage was even shown on national TV.

Obviously, North Korea wasn't too happy with the stunt — thus, the threatening fax.

But South Korea has reportedly already responded with a fax of its own, promising its military will retaliate if North Korea attacks. (Via WTTG)

A spokesperson for South Korea's Ministry of Defense says there have been no significant military movements in North Korea as of early Thursday.