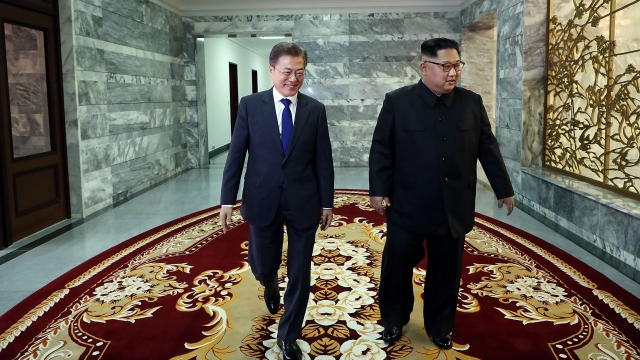 North Korea's criticism of its neighbor on Friday came the same day it launched two more missiles into the Sea of Japan.

North Korea launched two more missiles into the Sea of Japan Friday. It's Pyongyang's sixth such test in less than a month.

South Korea's military said the launch of what it assumes were short-range ballistic missiles came after North Korea vowed to not engage in any more peace talks with Seoul.

In his annual liberation day speech on Thursday, South Korean President Moon Jae-in vowed to unify the Korean peninsula by 2045.

A spokesperson for North Korea's Committee for the Peaceful Reunification of the Country responded by calling Moon "impudent." The spokesperson also questioned the timing of Moon's speech, pointing out it comes as South Korea and the U.S. are still engaged in joint military drills.

North Korea's protested against those exercises, which it sees as a violation of promises President Donald Trump made to Kim during their 2018 denuclearization talks.

But in its statement Friday, North Korea did not criticize the U.S. and instead said Pyongyang's decision to break off talks with South Korea is Moon's fault.