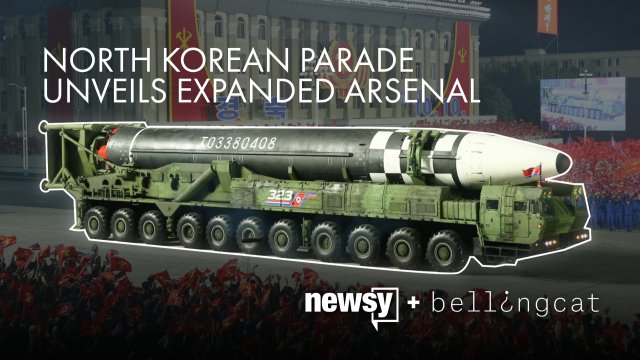 North Korea is forging ahead with its weapons development, despite international sanctions. A nighttime military parade, celebrating 75 years of the ruling Workers’ Party, gives us an inside look at the nation's expanding arsenal.

And now included in that arsenal is what analysts are calling the world’s largest mobile intercontinental ballistic missile — a new danger from Pyongyang.

"The tractor system that they're carrying it on — this had eleven axles. That's massive!" says Ken Gause, director of the Adversary Analytics Program at CNA.

"The warhead configuration did suggest that this thing may have a MIRV capability, which would be able to rain down a variety of different missiles onto a target," Gause says.

While analysts aren't sure if this new missile is functional, its ability to carry multiple nuclear warheads poses challenges to U.S. defenses.

"They already had the ability to target cities throughout the United States," says Jeffrey Lewis, a nuclear nonproliferation professor at the Middlebury Institute of International Studies. "The real advantage of having so many warheads is that the U.S. only has about 40 missile defense interceptors. If they can put three or four warheads on every missile, then they'll overwhelm us."

The parade also showcased a new iteration of a submarine-launched ballistic missile. Labeled "Pukguksong-4," the missile has cosmetic differences from its predecessor tested last October.

Analysts say it might be used on land, which would allow it to be deployed more quickly. But the new version has yet to be tested.

"This is the first time we've ever seen it. And it is really, really big. Which means it can fly probably a lot further than we think," Lewis says.

North Korean leader Kim Jong Un was flanked by the heads of his strategic and conventional forces. And in a speech, he denied his country has any coronavirus cases — while a white face mask sat on the lectern before him.

At times on the verge of tears, Kim signaled to the U.S. that a return to “strategic patience” means North Korea will continue developing its arsenal.

"One of the things that was very interesting about this parade is, we're scratching our heads trying to figure out where did they get the resources here?" Gause says. "It shows that our sanctions have been absolutely worthless."

Chinese and Russian entities have helped North Korea over the years.

But the tractors for the large missiles shown off during the parade don’t match their known transports, suggesting the tractors may be made indigenously in North Korea. The tires and parts of the cab also resemble tractors the country has used in the past.

The parade raises many questions, including whether its revelations will change the U.S. defense posture. A Defense Department spokesperson told Newsy its analysis was ongoing and that it’s consulting with allies in the region.