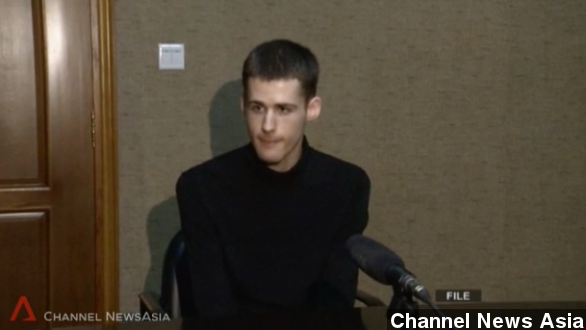 North Korea has sentenced another American to hard labor.

The guilty verdict came as no surprise. In fact, 24-year-old Matthew Miller basically admitted his guilt during a rare, CNN interview earlier this month. (Video via Channel News Asia)

MILLER VIA CNN: "Prepared to violate the law of DPRK before coming here. And I deliberately committed my crime. I have already admitted my guilt.”

Take that admission with a grain of salt. North Korea’s made a habit of parading its detainees in front of the cameras and forcing them to deliver confessions.

Nevertheless — Matthew Miller has been sentenced to six years hard labor. According to a statement released to the state-run Korean Central News Agency, he committed “hostile” acts when he entered the country under the “guise of a tourist.”

It’s unclear what actually happened. According to North Korean media, Miller ripped up his tourist visa and claimed asylum at the Pyongyang airport back in April. No one can say for sure though since Miller refused to comment on what landed him in detention during that CNN interview.

The details surrounding the cases of the two other Americans held in North Korea are equally vague. Jeffrey Fowle — a municipal worker from Ohio — is awaiting trial. He was reportedly arrested after leaving a Bible in his hotel room.

Christian missionary Kenneth Bae is serving out a 15-year sentence for unspecified crimes the state said amounted to plotting to overthrow the regime of Kim Jong Un. (Video via ABC)

All three men pleaded for U.S. help during recent interviews with CNN and the Associated Press. A lot of Korea observers seem to think Pyongyang is trying to use the three Americans as a kind of bargaining chip to pressure the U.S. to engage with North Korea.

If so, Forbes contributor Scott Snyder says this is a major miscalculation on North Korea’s part, which “may make these cases harder rather than easier to resolve, since the primary effect of such publicity is to feed American public skepticism about North Korea.”

In the past, visits from former high-level emissaries, including Presidents Jimmy Carter and Bill Clinton secured the release of American detainees. (Video via KCNA, Voice of America)

The U.S. doesn’t have diplomatic ties with North Korea and relies on Sweden instead as an intermediary.