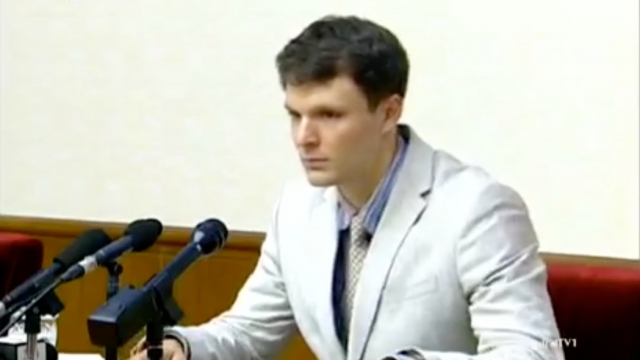 North Korea has reportedly sentenced University of Virginia student Otto Warmbier to 15 years of hard labor in prison for stealing a regime sign.

The American student arrested in North Korea for stealing one of the regime's propaganda signs has reportedly been sentenced to 15 years of hard labor in prison.

University of Virginia economics student Otto Warmbier was detained in January for the crime, which government-run media dubbed a "hostile act."

The Ohio native's trial reportedly lasted an hour, and he didn't have anyone from the U.S. there to defend him because of its strained ties with North Korea. A Swedish representative sat in on the trial for the U.S.

In fact, the U.S. and most of its allies have faltering ties with North Korea, especially amidst recent nuclear program tests and other alleged international law violations.

As for Warmbier, at the end of last month, he pleaded guilty, saying his actions were meant "to harm the motivation and work ethic of the Korean people."

Hard labor is a common sentence doled out by Kim Jong-un's regime. Several other Americans who committed past crimes against the state were given similar sentences, but some experts say 15 years is high.

This video includes clips from Korean Central Television and CNN, and an image from Getty Images.