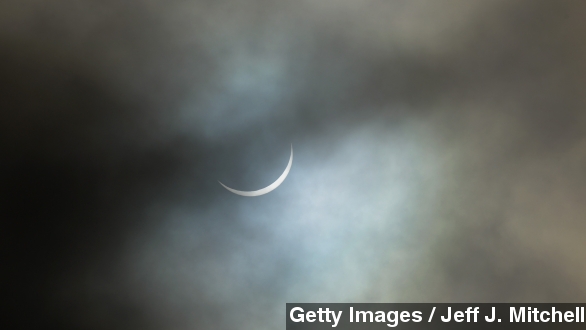 People on several islands in the Norwegian Sea got the opportunity to see a rare total solar eclipse Friday morning.

Some Europeans got the lucky chance to see a rare total solar eclipse Friday morning.

A total solar eclipse occurs when the moon passes in front of the sun and hides it completely.

Now not everyone in Europe got the chance to see this rare phenomenon. Those living in the Faroe Islands and Svalbard, both located in the Norwegian Sea, were the only places able to see the sun 100 percent covered by the moon. (Video via The Telegraph)

While total solar eclipses occur about once every year, they're not visible in all parts of the world each time. So CNN reported about 3,000 tourists were expected to descend upon the Faroe Islands to watch this year's eclipse.

An astronomer who traveled to Svalbard to watch the eclipse wrote in to The New York Times before it happened saying, "The weather forecasts for Svalbard mainly show 'partly cloudy,' which is what we hoped for — since it is almost never COMPLETELY clear."

According to the BBC, different portions of England got to see anywhere between 83 to 90 percent of a total solar eclipse, while those living in Scotland saw between 95 to 98 percent of one.

Apparently, though, the best place to watch the eclipse take place would have been at the North Pole.

Because of its location, National Geographic says the North Pole only experiences one sunrise and one sunset annually. The sunrise for this year just so happened to coincide with the eclipse.

So as the Slooh Community Observatory explained, tourists got to "see an extraordinary sight: an eclipsed Sun just emerging above the horizon for the first time in six months."

The next total solar eclipse will happen about a year from now in March and will only be visible to several islands in Indonesia.