Private Policing Is Rising In Chicago, But Not Everyone Is On Board 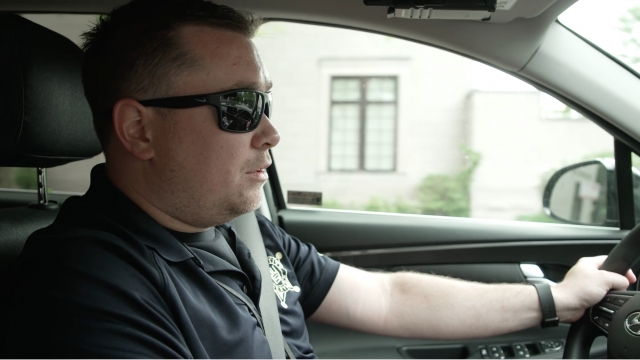 Private policing is rising in Chicago neighborhoods, but many residents don't know why they're there or what they can actually do.

Gun in holster, radio on and lights activated — it's the start of a routine shift for James.

"Just driving up and down the streets and alleyways and whatnot and just making sure that there's nothing suspicious going on," James said.

James is a full-time police officer in the Chicago suburbs. He was off duty but was patrolling a Chicago city neighborhood as a private guard.

"What we're trying to do is be good paid observers," he said.

With violent crime rising in many cities, wealthy neighborhoods like the one he works in on the north side of Chicago are hiring their own private police to keep residents safe.

When patrolling the streets, James looks for certain things.

"Opened garage doors, unattended packages, you know, and even bigger things," James said. "Like if someone appears to be trying to break into a vehicle, you know, if they are, it's not my job to get involved, but it is my job to notice what the person looks like, get a description, call the police."

James cannot make arrests. He says his job is mainly to report and deter crime.

To do so, he cruises around the same square mile all day inside Chicago’s Bucktown neighborhood.

NEWSY'S BEN SCHAMISSO: Under what circumstances would you intervene?

JAMES: If I saw someone right in front of me who was being attacked and it looked like there might be serious bodily harm or even death.

SCHAMISSO: You legally carry a weapon. You would use it, and you would do what it takes?

JAMES: This goes with police work in general, but, you know, it's always a last resort.

The Bucktown perimeter James patrols is one of five Chicago areas where off-duty police officers have recently been hired.

Technology is also part of the deal.

“Essentially what they'll do is have constant communication not just with the citizens when they're posting on a Slack channel, but with our officers," Vitale said.

Via a Slack channel, P4 officers and residents communicate in real time.

"They can post on a Slack channel that they're going to be taking their dog for a walk in this block at this time," Vitale said. "Can we provide a patrol during that time?"

"I think it could be the future of policing in many metro cities," Vitale said.

But many in Chicago, including the mayor, question the practice.

"We don't want to have a circumstance where public safety is only available to the wealthy," Mayor Lori Lightfoot said. "That's a terrible dynamic.”

The ACLU says it’s unclear what accountability mechanism is in place in case of misconduct. The group also argues that private policing can lead to racial profiling.

"They are helping create sort of a gated community and monitoring who is coming in and out of a community and such type of presence may discourage people from assembling, from visiting, from exploring the city that everyone in the Chicago is allowed to do," Michelle Garcial, deputy legal director at ACLU Illinois, said.

Vitale stresses that officers are thoroughly vetted and trained and that no weapon has been discharged since the program started in late October.

As for Chicago’s Bucktown residents, they say the patrolling car is omnipresent.  "Every time I walk my dog, even just like in a block loop around here, I will see at least one car," Chicago resident Laura Buecker said.

"They probably are down each street every 20 minutes to 30 minutes," Chicago business owner Jim Higgins said.

But opinions diverge on whether that’s a good thing.

"With all the carjackings that we've had recently, not maybe recently, within the past year, it does feel good to know somebody is out there," Buecker said.

"I don't know that I feel better and safer with green disco lights and some random dude in a vest walking around," Chicago resident Karen French said. "I don't know who he is. I don't like the disco lights."

Safer or not, there's one feeling everyone shares: confusion.

"I don't know what they can even do," Chicago resident Shawn Trewartha said. "Like, are they just driving cars? Can they actually, like, stop crime if given the chance? I don't understand what they're doing."

The confusion seems to exist because no one seems to know who in the neighborhood hired P4.

"If people are interested in community efforts to keep our neighborhood safe, then there needs to be like a lot more communication between everyone," French said.

A person familiar with the group of residents financing the project tells Newsy they wish to remain anonymous to avoid personal attacks.

Back in the car with James, the private agent says he believes people should be able to spend their money freely.

"If they feel like in the neighborhood here that they have had too much crime for their liking and they want to spend their money, however much of it is, and whatever they want to do to improve their neighborhood for their families, I don't see how that could be disturbing," James said.