Here Are Some Notable Firsts Ahead Of Super Bowl LVI 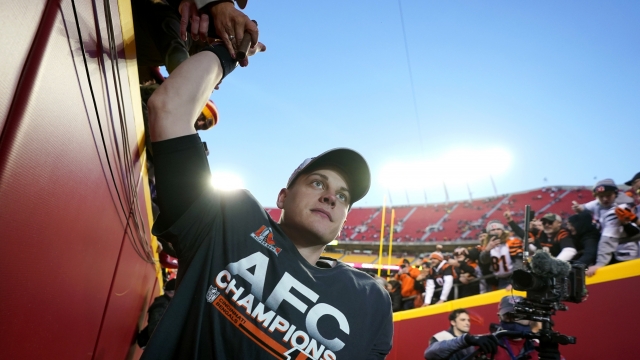 Football fans in L.A. big and small are pumped for the Super Bowl. It is, after all, the city that hosted the very first Super Bowl, played at the Los Angeles Memorial Coliseum in 1967.

This year, the brand-new SoFi Stadium will host its first Super Bowl.

Sunday will be the first time the Los Angeles Rams and the Cincinnati Bengals have ever met in a championship game. The competition is cutthroat.

The Bengals want to take home their first-ever Lombardi Trophy. They're one of 12 teams to never win a Super Bowl.

If the Rams win, it would be their first Super Bowl victory as the Los Angeles Rams. When they won the Super Bowl back in January 2000, of course, they were still the St. Louis Rams.

As for the quarterbacks, you've got Joe Burrow for the Bengals and Matthew Stafford for the Rams. Both were the first picks the years they were drafted. Both are now looking for that first Super Bowl ring.

"As a team, we're excited to put a product on the field that the fans are proud of and that kind of gives them bragging rights they haven't had that in a while so I'm excited to give that to them," Burrow said.

Then you've got the coaches. They are friends, former co-workers and young. Cincinnati's Zac Taylor is 38. L.A.'s Sean McVay is 36. This is the first time both Super Bowl coaches will be under the age of 40.

"I'm really happy for Zac," McVay said. "We have a great relationship. And you know, looking forward to always rooting for him, except for when we go against one another."

Whatever happens on Sunday, fans are ready.