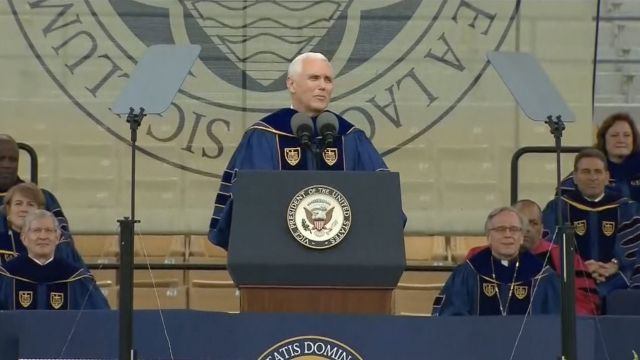 The protest was expected. Student activist groups like WeStaNDfor promoted the walkout days in advance.

But it was bigger than anticipated. According to NBC, roughly 100 students left the venue when Pence's speech began — twice as many students as expected.

Trump's Media Complaints Made Their Way Into An Unlikely Speech

President Donald Trump wove in complaints about the media during his commencement address at the U.S. Coast Guard Academy.

More than 2,000 people received degrees Sunday. Video shows the students who left received a mixture of cheers and boos from the crowd.

Pence was invited to be the commencement speaker after students petitioned against inviting President Donald Trump.

Pence didn't directly comment on the walkout, but he applauded Notre Dame for its "atmosphere of civility and open debate." He said other universities have policies that ultimately suppress freedom of speech.

One of the protesters told the New York Times: "Commencement is not a moment for academic exchange or political dialogue. It's a celebration of all of our hard work."

Notre Dame has a history of political commencement speakers, including six past presidents. And students have expressed their discontent before.

In 2009, President Barack Obama was heckled by anti-abortion advocates during his speech at the university.