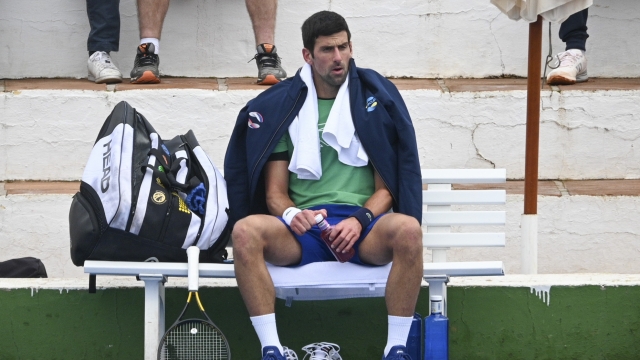 The tennis star said he failed to report he had traveled and tested positive for COVID in the weeks leading up to his arrival in Australia.

Novak Djokovic knew he'd tested positive for COVID-19 when he attended a newspaper interview and photo shoot in Serbia last month, saying Wednesday he made an "error of judgment" and should have immediately gone into isolation.

In a statement posted to his social media accounts, the tennis star also blamed "human error" by his support team for failing to declare that he had traveled in the two-week period before entering Australia.

The tennis star's brother described the judge's ruling as a "great defeat for Australian authorities."

Upon arrival, his visa was revoked and then later reinstated in an ongoing saga over whether he should be allowed into the country despite not being vaccinated against COVID-19. The back and forth has provoked outrage in Australia and overshadowed the lead-up to the Australian Open.

Djokovic acknowledged the lapses when he sought to clarify what he called "continuing misinformation" about his movements after he became infected last month — though he did not say what inaccuracies he was referring to.

The nine-time and defending Australian Open champion remains in limbo before the year's first tennis major starts Monday. The stakes are particularly high since he is seeking a men's record 21st Grand Slam singles title.

He won a legal battle on procedural grounds earlier this week that allowed him to stay in the country, but he still faces the prospect of deportation because his exemption from COVID-19 vaccination rules has been questioned. That decision is entirely at the discretion of Australia's immigration minister if deemed to be in the public interest for health and safety reasons.

Deportation could result in sanctions ranging up to a three-year ban from entering Australia, a daunting prospect for a player who has won almost half of his 20 Grand Slam singles titles here.