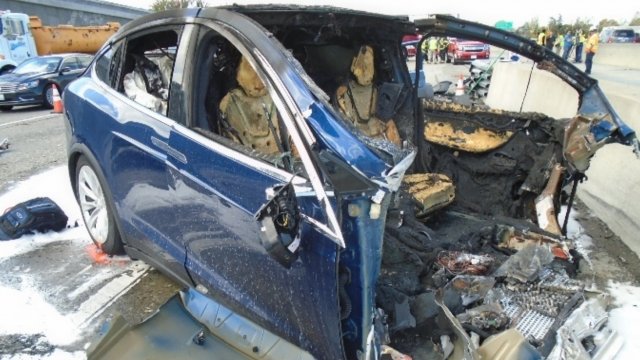 A lawyer for the family of the man who died said the report supports his argument that Tesla's system failed. Tesla disagrees.

The NTSB just released its preliminary report on a fatal Tesla crash in California earlier this year. And the findings could aggravate a legal battle over the crash.

A 38-year-old driver died in March when his Tesla slammed into a concrete median on a highway near San Francisco.

The news here is that the NTSB says the Tesla involved didn't detect the driver's hands on the steering wheel in the six seconds leading up to the crash. Tesla's autosteer feature keeps the car in the lane it's driving in and can even change lanes for the driver. But Tesla tells drivers to keep their hands on the steering wheel anyway. The car warns the driver if they take their hands off the wheel for too long.

The NTSB says the car's autopilot system was engaged continuously for almost 19 minutes leading up to the crash. It says in that time, the car alerted the driver three times to put his hands back on the steering wheel. The last alert came more than 15 minutes before the crash, according to the report.

The family of the man who died is considering suing Tesla. The family's lawyer told Buzzfeed News the NTSB report supports their argument that the car's autopilot system failed.

But Tesla points the finger away from its technology. It said in March the crash ended so badly because of a crash barrier that was damaged 11 days before the wreck and hadn't been replaced. In April, the company blamed the driver for the crash, saying he wasn't paying attention.

Last year, the NTSB found Tesla partly responsible for another fatal crash in which autopilot was on. The report said the technology didn't adequately ensure drivers would stay engaged. Tesla made changes to the technology after that.