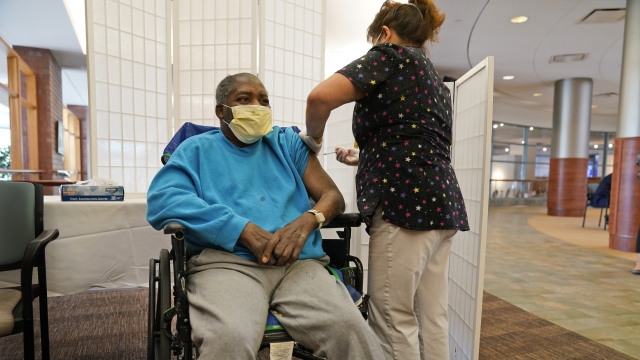 A federal mandate requires staffers at health care facilities that receive Medicaid or Medicare funding to have a least one dose of a COVID vaccine.

Nursing homes are having to turn down patients. The cause: A decades-long workforce shortage, worsened by employees sick with Omicron.

Dr. Karl Steinberg leads AMDA, which is the society for post-acute and long-term care medicine.

"We've had so many staff get it that some facilities are not able to really accept people coming out of the hospital," he said.

The industry has two branches: Long term care homes, where people live and post-acute, or skilled-care facilities, where people generally coming out of the hospital go to recover before returning home.

"We are worried about just being able to keep our buildings staffed, probably first and foremost," Steinberg said.

More than 420,000 people have left the nursing home industry since the start of COVID.

Experts partially blame pay. The average salary for a nursing home worker is about $31,000, which is slightly under $15 an hour.

Having enough staff does help you sort of stem the transmission and reduce the number of deaths once you have an outbreak," she said. "If those nursing homes can't find enough staff right now, resident care is going to suffer."

Konetzka says it's not as simple as paying more because nursing homes depend on Medicaid, which is a state and federal program that provides health coverage to low income individuals.

She warns patients will suffer without enough staff.

"Poor or negligent care," Konetzka continued. "Even as the pandemic improves or this surge dies down, we still have those fundamental problems in nursing homes that we need to solve."

Problems, under even more pressure as a new patient population enters post-acute care.

"There are younger individuals who physiologically will be aged by surviving COVID," ICU Pulmonary and Critical Care Physician Dr. Panagis Galiatsatos said.

Right now more than 150,000 Americans are in hospitals for COVID. More than a third are in the ICU.

For those who survive, getting help recovering is getting harder.

"What doesn't kill you in the medical world doesn't make you stronger. I promise you, what doesn't kill you just makes you incredibly weak," Galiatsatos said. "Our health care system needs to be better prepared to help these patients so they can gain back their quality of life."