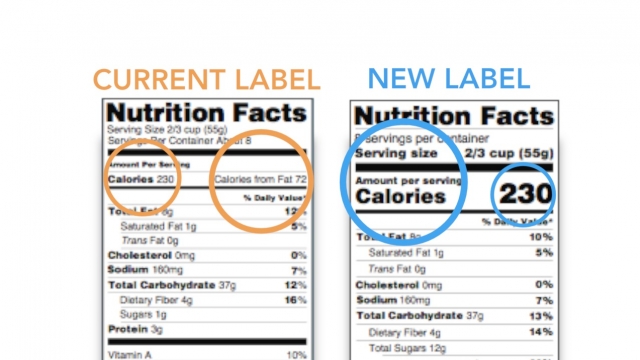 In 2018, packaged foods will have a new nutrition label so you can make healthier choices.

Your Cheetos are getting a facelift — or at least their nutrition label is.

The Food and Drug Administration finalized new nutrition fact labels for packaged foods Friday, but you won't see them in stores until 2018.

Some cosmetic changes include bigger font sizes and bolder type for calorie count and serving sizes. But you'll also see serving sizes reflect portions people actually consume — because nobody drinks only 12 ounces of a sports drink when the bottle is 32 ounces.

You'll also be able to see how much sugar is being added to certain foods, a change that's giving the sugar industry a toothache.

The Sugar Association posted on its website that it's "disappointed by the Food and Drug Administration's (FDA) ruling to require an 'added sugars' declaration. ... We are concerned that the ruling sets a dangerous precedent that is not grounded in science, and could actually deter us from our shared goal of a healthier America."

Eating too much sugar has been linked to cardiovascular disease and childhood obesity. One study by the journal JAMA Internal Medicine found that 71.4 percent of adults "consumed 10% or more of calories from added sugar."

The FDA hopes the new labels will help consumers understand how much sugar is added to packaged foods and enable them to make better choices.

The Center for Science in the Public Interest recommended that the FDA measure sugar in teaspoons instead of grams. President of CSPI Michael F. Jacobson told Vox, "People understand teaspoons so much more intuitively than grams."

But if the FDA's not sold on that advice, it could always just accept John Oliver's proposal and measure sugar in circus peanuts.