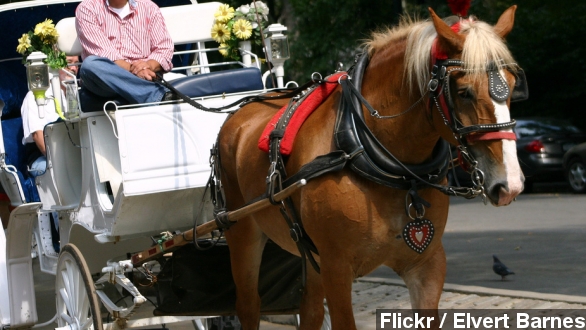 Horse-drawn carriages might soon be a thing of the past for the Big Apple.

NYC Mayor-elect Bill de Blasio has campaigned on his opposition to the carriages during his election and vowed to outlaw them completely in Central Park. (Via CNN)

De Blasio says the industry is inhumane and inappropriate for the new year and will move quickly to “make horse carriages no longer a part of the landscape in New York City.” (Via Fox News, NBC)

De Blasio proposes the drivers replace the horses with alternative vehicles, such as antique-style electric cars. (Via CNN)

Advocacy groups around the country have petitioned for this ban for years.

Celebrity spokesperson Lea Michele for PETA says the horses are forced to "do hard, physical labor … and breathe exhaust fumes."

A petition on NYCLASS had more than 4,000 signatures Tuesday. (Via NYCLASS)

And the Coalition to Ban Horse-Drawn Carriages was formed in 2006 in response to the death of a carriage horse that was spooked and crashed into a station wagon. In addition to ensuring public safety, the coalition says the ban would remove the unpleasant smell permeating the streets. (Via The Coalition for New York City Animals)

Those most opposed to the ban include the drivers and tourists who say the carriages are part of the iconic landscape of the city.

Tourists are rushing to get their last rides with the horses before they’re gone for good. Many of the drivers say their customers “can’t believe what the mayor is doing.” Others say the ban would hurt the tourist economy. (Via New York Daily News)

One driver tells CBS the horses are cared for like family and the industry is strictly regulated.

It is unclear what will happen to the more than 300 horses if the ban were to take effect. De Blasio will take office Wednesday, January 1.