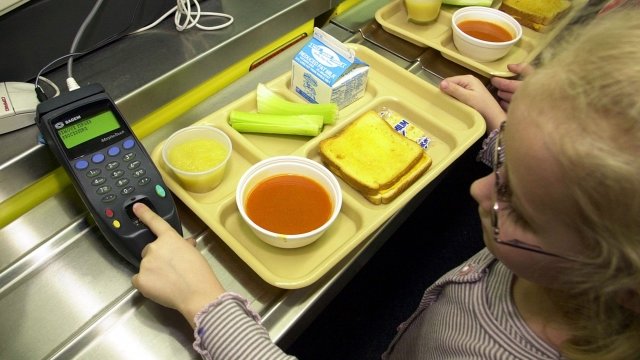 About 1.1 million students attend public school in New York City. And they're all getting free lunch starting this year.

Many students in New York City won't have to worry about forgetting their lunch money this year.

That's because all 1.1 million students attending public school in the Big Apple will get school lunch free of charge.

The free meals are provided through the New York City Department of Education's Free School Lunch for All program.

About 75 percent of students were eligible for free lunch last year, according to the city. But now the NYC Department of Education can expand the program because of federal funding.

The funds came from the U.S. Department of Agriculture's Community Eligibility Provision. It gives money to low-income school districts for student meals.

New York City Mayor Bill de Blasio said in a statement: "We know that students cannot learn or thrive in school if they are hungry all day. Free school lunch will not only ensure that every kid in New York City has the fuel they need to succeed but also further our goal of providing an excellent and equitable education for all students."

The so-called "millionaires tax" would generate as much as $800 million each year by raising the city's highest income tax rate.

The free lunch program is expected to save each New York City student about $300 a year. The district already provides free breakfast to all students.

School districts in other cities like Chicago, Boston and Dallas also provide free lunches to all students. But those districts have a much smaller student population.