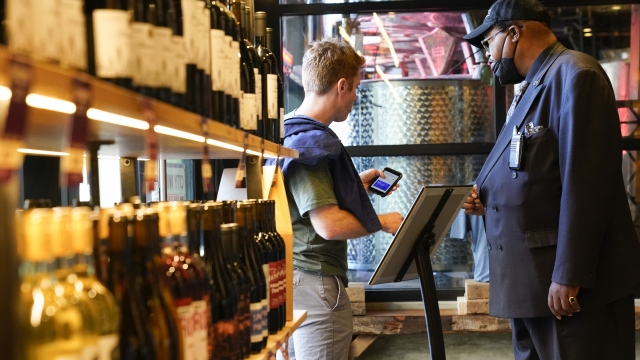 Anyone visiting or living in New York City will soon have to show proof of vaccination with either their vaccine card or an app called "Excelsior Pass."

"The only way to patronize these establishments indoors will be if you're vaccinated, at least one dose," Mayor Bill de Blasio said.

A remarkable move in the fight against the COVID-19 Delta variant, New York City becomes the first major U.S. city to require anyone who goes into restaurants, gyms and all entertainment venues to be vaccinated.

One restaurant manager said the response to the mandate has been a good one.

"Thus far it's been pretty positive because everyone wants to keep working," Tarallucci E Vino Operations Manager Cedric Sanders said. "And so now they feel there's that extra layer of security while they are at work."

The new requirement is the first of its kind in the United States but mirrors moves that are already underway in other countries.

Employees at these places will also need to prove vaccination.

"I think it's an extremely important thing for us to do," restaurant employee Cole Vermillera said. "For vulnerable people around us, as employees, we should be safe and we should be protecting the people that we serve."

But some people aren't on board with the new mandate.

A new CDC memo warns the Delta variant is as contagious as the chicken pox. It raises urgent new questions about what activities are safe.

"I don't think it's a good idea," New York City resident Tony Palumbo said. "The city is just getting on defeat again and that's going to stop a lot of people from going out. I can see it slowing down now."

"This will encourage a lot more vaccination. We've seen it already," Mayor de Blasio said. "We've seen the impact of the mandate we've put in place for city workers."

The program is modeled after the vaccine passport programs rolled out in France and other European countries.

The mandate will go into effect in two weeks, with full enforcement beginning next month. We're awaiting more information about what the penalties will be for people or businesses that don't comply.