NYPD And Mayors Have A History Of Clashing 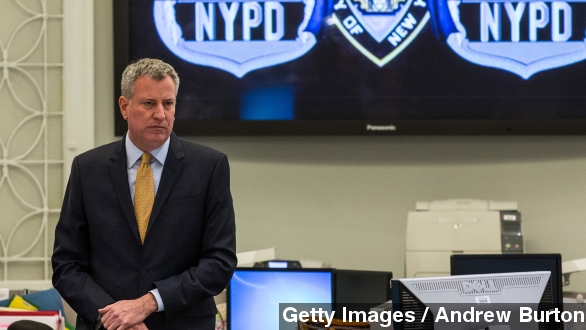 Much is being made of the rift between Mayor Bill de Blasio and the NYPD, but there's a history of disagreement between City Hall and the union.

In the NYPD versus Bill de Blasio narrative, much has been made of this: A recent video showing officers turning their backs on the mayor as he prepared to speak about two murdered NYPD officers.

“There’s blood on many hands tonight … That blood on the hands starts on the steps of city hall on the office of the mayor,” Patrolmen’s Benevolent Association head Patrick Lynch said in a news conference.

The police union has blamed the mayor for inciting protests against police over high-profile police killings. (Video via YouTube / WeAreChange)

And, for saying things like this about his mixed-race son Dante: “We’ve had to literally train him … in how to take special care in any encounter he has with the police officers.”

“Can you point out to me one mayor that has not been battling with the police unions in the last 50 years? Name one," Police Commissioner Bill Bratton said in a news conference.

In fact, each of the last four New York City mayors — Democrat, Republican and Independent alike — had his fair share of disagreements with the union.

We’ll start with Mayor David Dinkins, who in 1992 The New York Times reported was the target of an actual rally called by the Patrolmen’s Benevolent Association. (Video via WABC)

The reason? Among others, Mayor Dinkins had proposed an agency to probe allegations of police misconduct, and officers accused him of mishandling protests against police.

The next mayor, Rudy Giuliani, didn’t fare much better.

“We've had four months of propaganda starting with the president that everybody should hate the police,” Giuliani recently told Fox News.

These days he’s been a critic of President Obama and Mayor de Blasio’s treatment of the NYPD.

But The New York Times reported when he was mayor in 1997, officers organized a march in protest of him too, over a pay dispute.

10 years later the union used that against him again when it publicly chose not to back his bid for the presidency.

Finally, there’s Michael Bloomberg, whose very own home was picketed by members of the police union over contract and pay disputes in 2004. (Video via YouTube / mayorbloomberg)

All this isn’t to say that New York City mayors are especially anti-police, or that the NYPD is especially contentious — but historically, the two do often find themselves at odds.