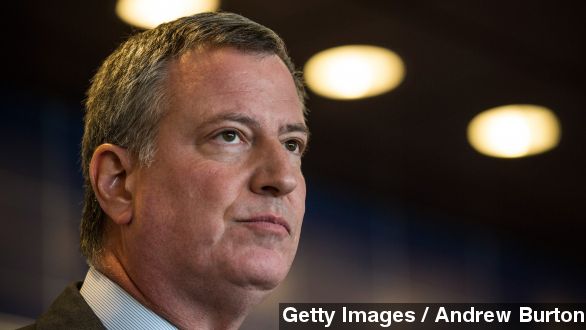 New York City Mayor Bill de Blasio and the city's police force have been at odds when it comes to reforming the department's practices. The latest announcement from the city's police union shows the divide is only getting worse.

The Patrolmen's Benevolent Association is urging its members to sign a petition preventing the mayor and city council speaker Melissa Mark-Viverito from attending the funerals of fallen officers.

Several protests in New York have criticized the grand jury's decision not to indict Daniel Pantaleo, the officer involved in the death of Eric Garner this summer. De Blasio urged New Yorkers to respect the judicial process in an interview with ABC, but also mentioned this.

"With my son we said, 'look, if a police officer stops you do everything he tells you to do. Don't move suddenly, don't reach for your cell phone,' because we knew, sadly, there's a greater change it might be misinterpreted if it was a young man of color," Bill de Blasio told ABC's George Stephanopoulos.

It's comments like these that have angered retired and current NYPD officers.

"My thought is that if he doesn't respect us in life, why should we have him respect us at the time of our death?" a retired police lieutenant told WCBS.

Although the issue of police brutality has dominated the national conversation for months, de Blasio and Mark-Viverito were critics of excessive force long before the Michael Brown and Eric Garner cases made headlines.

One of de Blasio's main campaign platforms was repealing stop-and-frisk laws in New York City, which have been accused of promoting racial profiling. (Video via Bill De Blasio For Mayor)

Mark-Viverito has also called for the end of stop-and-frisk in New York City. And she's criticized the NYPD for what she feels is a disproportionate number of marijuana arrests against minority New Yorkers. (Video via YouTube / Melissa Mark-Viverito)

Since the announcement of a non-indictment in the Eric Garner case, de Blasio has called for federal funds to purchase police body cameras.