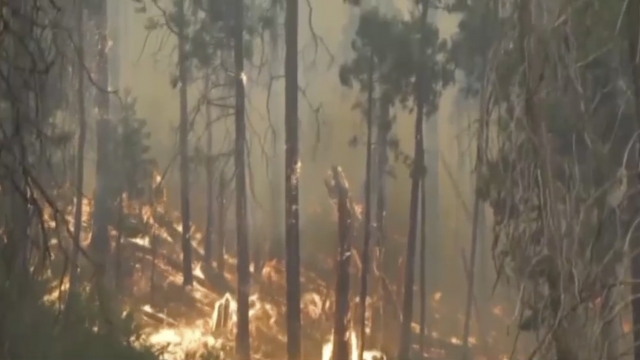 Nearly 40,000 firefighters are battling the Oak Fire in California, but the root cause of the fire can't be stopped by just water and fire retardant.

Fire officials are calling it a mega-fire: The Oak Fire is raging through the drought-stricken, forest-covered mountains surrounding Yosemite National Park.

"The fire behavior we are seeing on this incident is really unprecedented," Said Jon Heggie, Battalion Chief of Cal Fire.

The blaze exploded in size in just a few days, with fire crews driving through the forest with flames surrounding them engulfing the trees and filling the air with smoke. The sky was turned orange, and the fire turned the picturesque forest into a hellscape.

The flames incinerated one house in just minutes, leaving nothing but the foundations and scorched appliances.

Cars were torched where they were parked, with nothing left but burned out frames.

The fire raced through extremely dry fuel on the forest floor, giving little time for residents to escape.

Many are going to have to evacuate with just the shirts on their back.

"I had just enough time to get birth certificates... the picture of my parents," Maguire said.

The fast-moving fire forced residents to make hard decisions, with some leaving missing pets behind.

Thousands of fire fighters are still battling the blaze, using planes to drop retardant along with hundreds of fire trucks and water tankers. While the crews are making some progress, they can’t fight the underlying problem.

"This is a direct result of climate change," Heggie said. "You can’t have a 10-year drought in California and expect things to be the same. We’re paying the price for that drought and climate change."

Almost 100% of the forest is in extreme or exceptional drought conditions.