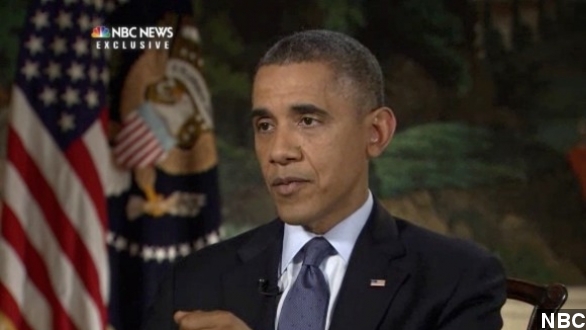 President Obama apologized in an NBC interview for saying Americans could keep their old policies under the Affordable Care Act.

If you like your health care plan, you can keep it ... except for about 5 percent of Americans who buy insurance on their own. President Obama apologized in an interview Thursday for misleading Americans with his popular refrain, which dates back to the early days of his first term.

"I am sorry that they are finding themselves in this situation based on assurances they got from me." (Via NBC)

Todd explained on MSNBC's "Morning Joe" last week the Obamacare rollout was doomed to fail because the administration made promises that are out of its hands.

What could end up being even more damaging is an NBC investigation which claims the Obama administration knew in 2010 the "you can keep it" line was false.

The investigation says the Department of Health and Human Services narrowed the requirements for old health care policies to be acceptable under the new law. An estimate from 2010 said as many as 67 percent of customers would not be able to keep their policies. (Via The White House)

Although he offered his mea culpa, Obama made clear he doesn't think he lied to Americans, but rather underdelivered. "I meant what I said. We worked hard to try to make sure we implemented it properly. Obviously we didn't do a good enough job." (Via Politico)

Republican congressmen have called for Sebelius' resignation over the botched website rollout. Although Obama has taken the blame for the technical glitches, at least 10 GOP senators sent the president a letter calling for him to fire Sebelius immediately. (Via Bloomberg)

Administration officials say the Obamacare enrollment site should be fully repaired by Nov. 30.