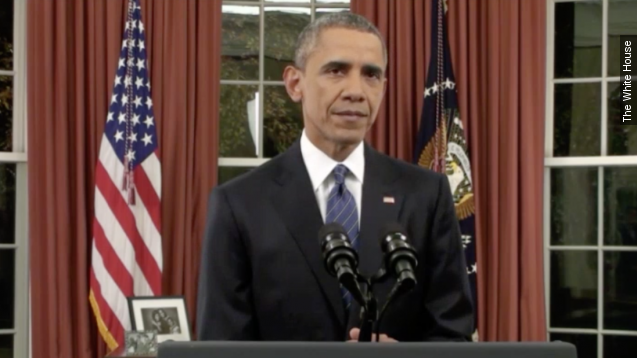 The president addressed the nation in a prime-time speech, calling for tighter gun laws and for Americans to "reject discrimination" against Muslims.

"This was an act of terrorism designed to kill innocent people," Obama said.

President Obama addressed the nation from the Oval Office Sunday night nearly a week after the deadly attacks in San Bernardino, calling on congress to authorize military force against ISIS, but stopping short of requesting ground forces. (Video via KCAL)

Obama also addressed the issue of gun control in his speech.

"Congress should make sure that no one on a no-fly list is able to buy a gun. What could possibly be the argument for letting a terror suspect buy a semi-automatic weapon?" Obama said.

"We cannot turn against one another by letting this fight be defined as a war between America and Islam," Obama said.

The husband and wife suspects responsible for the attacks in San Bernardino were both Muslim. The wife allegedly pledged her allegiance to ISIS moments before the attack took place.

“If we’re to succeed in defeating terrorism we must enlist Muslim communities as some of our strongest allies rather than push them away through suspicion and hate,” Obama said.