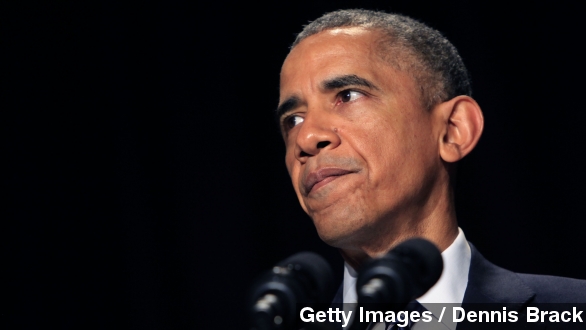 Obama's National Prayer Breakfast speech Thursday was criticized after he compared the actions of ISIS to slavery in the U.S. and the Crusades.

"Unless we get on our high horse and think this is unique to some other place, remember that during the Crusades and the Inquisition, people committed terrible deeds in the name of Christ," President Barack Obama said Thursday at the annual National Prayer Breakfast.

But — and this is the part a lot of his critics are mad about — he compared the group's acts of terror to the Crusades and Christianity, among other analogies.

"In our home country, slavery and Jim Crow all too often was justified in the name of Christ," Obama said.

Some viewed the comparison as an attack on Christianity.

Fox News contributor Laura Ingraham said, "We've evolved, and sorry, this Islamic Jihadist movement is regressing. So the president could just say that, but, instead, he always has to lecture us. It's something in his DNA."

To be clear though, he wasn't blaming, but rather appearing to draw a comparison between horrific events whose perpetrators often claimed a divine mandate.

So there was definitely an attempt to draw a comparison, though his stated point was that "No God condones terror."

The more interesting takeaway, though, might be that others took his comments Thursday to mean he was finally linking ISIS to Islam.

For a little context, the White House has been catching a lot of heat lately for avoiding the terms Islamist terrorist or Islamic radicals when referring to ISIS.

In January Senator Lindsey Graham had this to say on "The Hugh Hewitt Show": "When I hear the president of the United States and his chief spokesperson failing to admit that we're in a religious war, it really bothers me."

To which Obama explained to CNN, "It is absolutely true that I reject a notion that somehow that creates a religious war because the overwhelming majority of Muslims reject that interpretation of Islam. They don't even recognize it as Islam."

And for as dissatisfied as many Republicans seem on Obama's stance, The Jerusalem Post notes George W. Bush — Obama's Republican predecessor — also, "never characterized the fight in religious terms." He instead used the term "war on terrorism."

"The terrorist practice in fringe form of Islamic extremism that has been rejected by Muslim scholars and the vast majority of Muslim clerics. A fringe movement that perverts the peaceful teachings of Islam," Bush said in 2001.

The White House hasn't yet commented on the backlash following Thursday's speech.