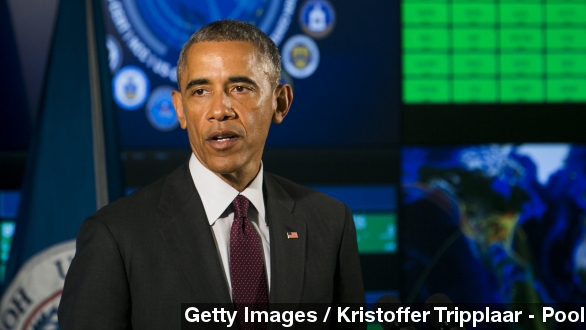 President Obama on Wednesday will outline his plan to spur faster, less-expensive broadband in the U.S.

“You know what it feels like when you don't have a good Internet connection. Everything's buffering, you're trying to download a video, you've got that little circle thing that goes around and around — it's really aggravating,” said President Barack Obama.

Looks like everyday Americans aren't the only ones frustrated by Netflix buffering forever and ever.

In Cedar Falls, Iowa, Wednesday, the President will outline steps the Administration plans to take to usher in fast, affordable broadband for the entire country.

So why is the President headed to Cedar Falls? Turns out, when it comes to Internet download speeds, it's one of a few cities in the U.S. that compares to international leaders in the broadband arena.

More important than Netflix buffering, the Administration argues there's a correlation between broadband speeds and economic growth and prosperity. The idea is, by cranking up U.S. Internet speeds, the country will be more able to compete globally.

And here's how Obama plans to tackle the problem:
• Opposing state laws that keep cities from being able to build broadband networks of their own
• Hosting a summit aimed at expanding local organizations that are working to bring faster broadband
• Launching BroadbandUSA, an initiative that will assist communities in planning and building out broadband networks
• Offering up grants and loans for rural broadband providers
• Removing unnecessary regulations and policies that stand in the way of broadband improvements

Ars Technica says the Federal Communications Commission is already looking at how it can affect state laws barring communities from improving or building broadband networks.

The Washington Post quotes FCC Chairman Tom Wheeler who says, "If the people, acting through their elected local governments, want to pursue competitive community broadband, they shouldn’t be stopped by state laws."

So, for what it's worth, it seems the FCC and the Obama Administration are on the same page with that particular point.

Still, The New York Times quotes one community broadband advocate who says changing or invalidating these laws won't be easy, because "telecom companies have spent millions of dollars in state legislatures to promote these limits."

In other words, this plan is going to be a controversial one. We'll hear more about President Obama's thoughts on broadband and the rest of the Internet during his State of the Union Address Jan. 20.