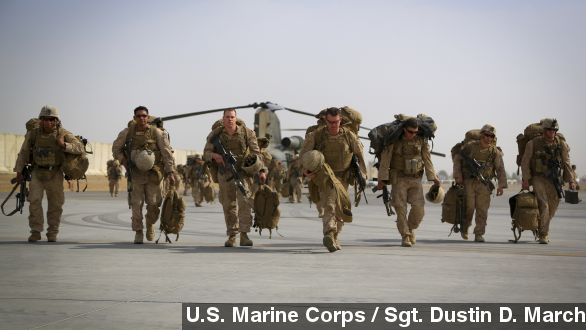 The New York Times reports President Obama has authorized through 2015 a broader role for U.S. combat forces in Afghanistan.

Combat operations were supposed to end in Afghanistan after this year. (Video via U.S. Department of Defense)

“This is the year we will conclude our combat mission in Afghanistan,” said President Obama.

But under a new authorization from President Obama, for at least another year, U.S. troops stationed there will continue offensive operations against militant groups that threaten Afghanistan's stability. (Via U.S. Department of Defense)

The New York Times was the first to report on the broader mandate, which it said came after a “lengthy and heated debate” between “two often-competing imperatives.”

That is, the military’s demand it finish its remaining missions in Afghanistan and the president’s pledge to end the U.S. fighting force there — a pledge which had drawn criticism from Republicans who said leaving too early could destabilize the country.

Those critics pointed to the U.S.-trained Iraqi army's dismal response to ISIS as a cautionary tale. (Video via YouTube / Foukoul Hani Rif)

The paper also quotes both U.S. and Afghan officials who said Afghanistan’s new president, Ashraf Ghani was more willing to work with the U.S. than his predecessor, Hamid Karzai, who had refused a security deal allowing U.S. troops to remain in the country.

The new authorization will reportedly not impact the number of those troops. 9,800 are scheduled to remain there, with all pulled out by the end of 2016. (Video via U.S. Department of Defense)