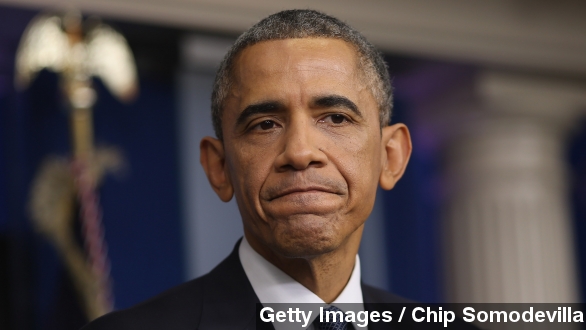 President Obama continues to draw headlines even while on vacation. A military couple's wedding was moved to accommodate the President's golf game.

"President Obama's Golf Game Bumps Military Wedding." In terms of optics, headlines don't get much worse than that.

The Obama family is in Hawaii for its year-end vacation, and the president's been enjoying a few rounds of his favorite pastime.

Also in Hawaii: Army captains Natalie Heimel and Edward Mallue Jr., who were planning to tie the knot Sunday near the 16th tee at Kaneohe Klipper Golf Course.

The couple knew the President was going to be in the area. They even sent him an invitation, though he politely declined and wished them well.

Then, as Bloomberg first reported, they got another, less welcome announcement: the wedding would have to be relocated so the president could "play through." The bride's sister told the outlet, "It was emotional, especially for her — she’s the bride and in less than 24 hours they had to change everything they had planned."

Fortunately, the wedding wasn't ruined. The couple had been warned in advance about the possibility of a schedule conflict, and they had some backup sites ready to go. The ceremony was moved, and the wedding went off without a hitch.

But still, moving a once-in-a-lifetime ceremony — between two military members, no less — for a round of golf struck a nerve with the media, especially conservative outlets who blasted the president for "ruining" the couple's wedding.

One CBS anchor asked his cohost, "If the president of the United States said 'I need this space, Ebony, can you move your wedding?'"

On CNN, Chris Moody said, "Let's give him the benefit of the doubt, say he had no idea, his staffers had no idea. Still, the optics are hilariously bad."

There was plenty of outrage on social media as well, including from Kentucky senator and frequent Obama critic Rand Paul.

Just about the only people not upset by the snafu? The bride and groom, who received a personal phone call from the president apologizing for the mix-up. One guest told CNN the newlyweds "were thrilled and so excited" to talk to the president.

This is the second big snafu to come out of Obama's vacation so far. His links partner, Malaysian Prime Minister Najib Razak, had to cut his vacation short after being slammed on social media for golfing while his country was suffering severe flooding.

This video includes an image from Getty Images and photos courtesy Becca Dryer.