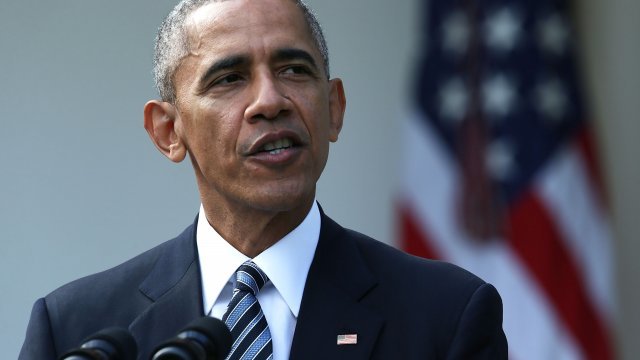 It's one of the few issues he's spoken out on since he left office.

Before he left office, President Barack Obama told the press he'd mostly refrain from weighing in on the back-and-forth of politics — with one big exception.

Obama told reporters, "The notion that we would just arbitrarily, or because of politics, punish those kids when they didn't do anything wrong themselves, I think would be something that would merit me speaking out."

He's referring to the Deferred Action for Childhood Arrivals program, or DACA. And when President Trump finally decided to end the program, Obama kept his word.

In a Facebook post Tuesday, the former president called Trump's choice to end the program "cruel," "wrong" and against common sense.

Obama has made public statements about politics since leaving the White House, but this is his broadest one yet.

Obama's Post-White-House Honeymoon Is Almost Over

The former president's first public appearance since he left the White House is set for April 24.

His thoughts were echoed by former Vice President Joe Biden, who said on Twitter: "Brought by parents, these children had no choice in coming here. Now they'll be sent to countries they've never known. Cruel. Not America."

Obama also called the move by Trump "self-defeating" because he said those in the program "want to start new businesses, staff our labs, serve in our military, and otherwise contribute to the country we love."

A report from an advocacy group and a liberal think tank said rescinding DACA could cost 30,000 people their jobs every month for the next two years. That in turn would cost the U.S. over $460 billion over a decade.

DACA was created by Obama through an executive order in 2012 and has been challenged in the courts as unconstitutional. Obama defended the program's legality and said ending it was "a political decision, and a moral question."