Obama Stands Up For Trump Supporter At Clinton Rally 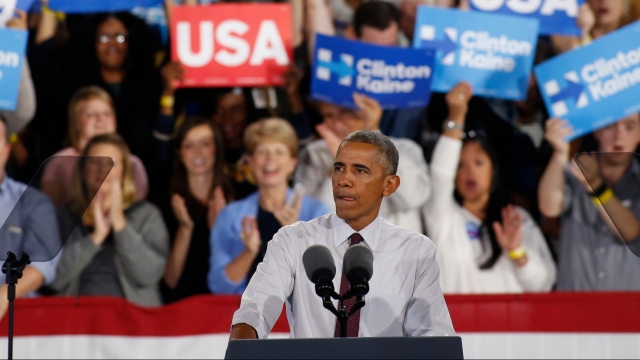 President Obama schooled a booing crowd on staying focused and respecting others.

Obama was speaking in North Carolina when a man held up a sign supporting Donald Trump and started chanting.

The crowd booed and chanted as the protester was led out.

"Hey! Hold up! Hold up!" Obama yelled as he tapped his hand on the lectern, trying to quiet the crowd.

Obama got the crowd to quiet down about a minute later. He then politely but strongly lectured them.

"Hey! I told you to be focused, and you're not focused right now." Obama said, pointing his finger at the crowd.

"Everybody, sit down and be quiet for a second," Obama said when some people in the audience apparently weren't listening to him.

"You've got an older gentleman who is supporting his candidate. He's not doing nothing," Obama said with a smile. "You don't have to worry about him."

SEE MORE: More Than Half Of US Voters Are Worried About Violence On Election Day

"First of all, we live in a country that respects free speech," Obama said. "Second of all, it looks like maybe he might have served in our military, and we ought to respect that. Third of all, he was elderly, and we've got to respect our elders. And fourth of all, don't boo — "

"Vote!" members of the audience yelled.