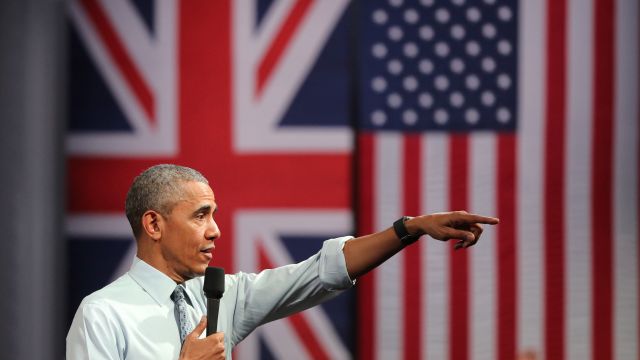 While speaking in the United Kingdom, President Barack Obama said he thinks a few new controversial laws in the U.S. should be overturned.

President Barack Obama has made it clear where he stands on the new laws that limit LGBT protections in the U.S.

Speaking at a news conference with U.K. Prime Minister David Cameron, Obama said, "The laws that have been passed there are wrong, and should be overturned."

Obama is referring to two recent laws in Mississippi and North Carolina that opponents say are discriminatory.

The Mississippi law allows organizations — like businesses — to deny services based on their religious beliefs, without penalty.

The North Carolina law has gotten attention because it requires transgender people to use the bathroom that matches the sex on their birth certificate.

This week, the U.K. released an advisory for people traveling to the U.S., which said "attitudes towards LGBT people differ hugely across the country" and cautioned travelers to be aware of local laws.

That advisory is partially what Obama was responding to. He told a crowd of reporters the people who live in those states are "wonderful people" and that travelers would receive "extraordinary hospitality."

This video includes clips from The White House, BBC and CBS and images from Getty Images.