Obama: Those With Canceled Insurance Policies Can Renew 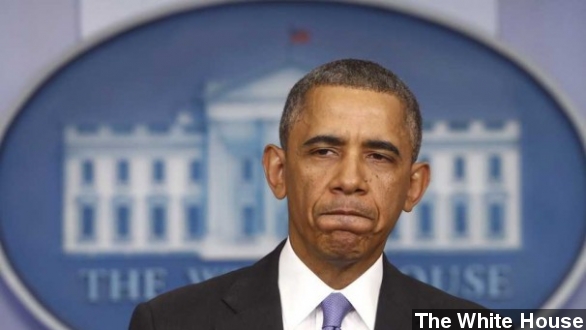 As disapproval for Obamacare continues to grow, the president announced those with canceled insurance policies will now be able to renew them.

PRESIDENT OBAMA: "Already, people who have plans that predate the Affordable Care Act can keep those plans if they haven't changed; that was already in the law." (Via The White House)

As disapproval for Obamacare continues to grow, the president spoke Thursday announcing those with canceled insurance policies will now be able to renew them.

This comes after issues plagued the rollout of the Affordable Care Act. Glitches on Healthcare.gov prevented less than half the estimated users from accessing the site. (Via Healthcare.gov)

Critics of the rollout have also taken issue with what they call a number of broken promises from the administration.

"If you like your health care plan, you can keep your plan." ​ (Via Washington Free Beacon)

Well, that turned out to be false for millions of Americans. Obama used that as a key talking point in Thursday's announcement. (Via The Atlantic)

Critics also complained the president promised health insurance premiums would not go up — but for some, they did, and significantly. (Via The Daily Caller)

"I understand why folks are frustrated. I would be, too. … We fumbled the rollout on this heath care law."

The new adjustment only applies to people who have already had their insurance policies canceled and will allow them to keep their policies through 2014. (Via CBS)

It also gives state insurance commissioners the option to follow through with the proposal or not. The canceled plans did not comply with Obamacare coverage requirements. (Via The New York Times)

But the announcement is definitely no surprise. On Thursday morning, House Minority Leader Nancy Pelosi suggested a change was in the works.

Obama's announcement and the "fumbled" launch has been a bit of an embarrassment for both the president and some Democrats alike.

"Well, there's almost a rush to the exit doors for some incumbent democrats who are up for reelection next year. ... Officials seem to be reacting to those enrollment numbers by saying they don't have anywhere to go but up." (Via CNN)

The government projected half a million people would be enrolled in