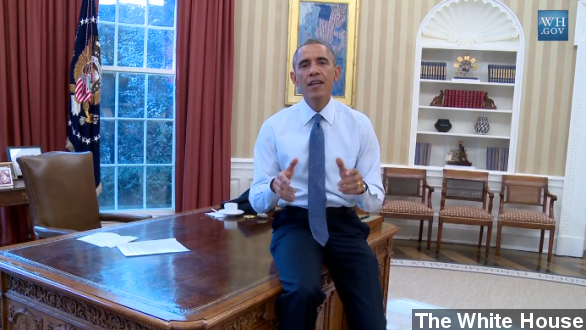 President Obama will announce the executive action he plans to take on immigration reform during a speech Thursday night.

PRESIDENT OBAMA VIA THE WHITE HOUSE: "Tomorrow night I'm going to be announcing, here from the White House, some steps I can take to start fixing our broken immigration system."

President Obama is ready to announce executive action on immigration — this, after a year of insisting he did not have the legal authority to do so.

OBAMA VIA TELEMUNDO: "There is a path to get this done, and that is through Congress."

The president says he has no choice but to act on his own because the Republican-controlled House won't take up a bipartisan bill to overhaul immigration policy. But his decision to go it alone has some critics — mostly on the right — complaining he's going too far.

As a constitutional law professor at George Washington University put it to NPR: "I think what's so truly dangerous about this is you have a system that's designed to force compromise and a president who's lost faith in that system."

Then again, he'd hardly be the first president to act unilaterally on immigration.

Among the actions President Obama is expected to announce Thursday is granting legal status to the parents of American citizens who themselves are in the country illegally. The Migration Policy Institute says that could include up to 3.6 million people.

A recent NBC News / Wall Street Journal poll found the American public is split on whether the president should use executive action on immigration. Forty-eight percent oppose it.