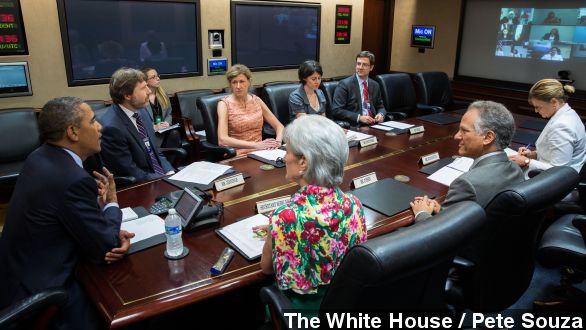 The Department of Health and Human Services is extending the deadlines for enrollment in the healthcare marketplace.

President Obama's signature bill, the Affordable Care Act or Obamacare, is undergoing yet more substantial changes. The White House announced Friday it's pushing back several deadlines for enrollment in the healthcare exchange marketplace.

The Department of Health and Human Services is extending the deadline for insurance marketplace signups by eight days. The new signup deadline to be covered under Obamacare in 2014 is now Dec. 23 rather than Dec. 15. (Via Politico)

Additionally, the department pushed back enrollment for 2015 insurance plans to Nov. 15, 2014 instead of Oct. 15, 2014. That enrollment period was also extended by about a week. (Via The Washington Post)

White House press secretary Jay Carney told reporters the delays would encourage more people to get coverage on the healthcare market and give insurance companies a better picture of the overall healthcare landscape.

"This gives them more time to assess the pool of people who are getting insurance through the marketplace, and then make decisions about what rates will look like in the coming year." (Via C-SPAN)

But many conservatives are crying foul, pointing out the 2015 delay pushes the enrollment signups past the midterm elections on Nov. 4. A Bloomberg writer says "the government seems to be making things harder on consumers in order to prevent them from having vital information about their health-care system before they go to the polls on Election Day."

The delays are also likely to be a response to glitches in the healthcare.gov website, which have prevented people from signing up for healthcare in the early weeks of the rollout. (Via Fox News)

And as CNN notes, the administration's hoping more time will convince more of the coveted young and healthy demographic to sign up for the exchanges.

The administration says the majority of problems with the website will be fixed by the end of November.