Obesity Could Cut Life Expectancy By Almost A Decade 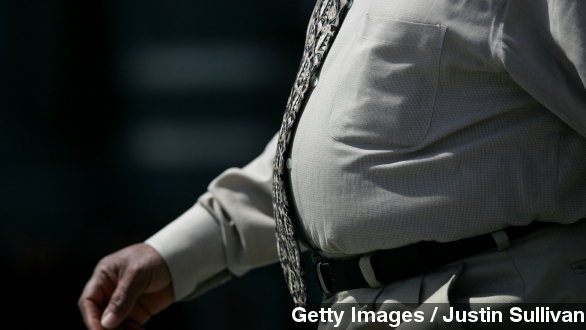 A study out of Canada suggests certain obesity-related illnesses can shorten life expectancy by up to eight years.

It's no secret obesity often leads to serious health concerns, like increased potential for developing diseases or shortening your life span. Now, according to a new study, we know just about how many years could be knocked off your life.

The study out of Canada revealed life expectancy could be shortened by up to eight years due to obesity-related illnesses. (Video via KTLA)

About 4,000 white men were considered in the study, which specifically looked at heart disease and type 2 diabetes. Now, lower life expectancy wasn't the only worrying outcome — obesity also can affect your quality of life.

"It robbed people by as many as 19 years of healthy living," added an anchor for KHOU.

Because of that, researchers expressed higher concern for children struggling with obesity. A medical analyst explained further, "If you are obese in kindergarten, you are twice as likely to be obese in eighth grade and four times as likely to be an obese adult and battle obesity for the rest of your life."

Smoking was also considered in heart disease and diabetes risks.

We will note the data from the Canadian study was actually gathered from a U.S. study done between 2003 and 2010. As you can see from this graph provided by the Centers for Disease Control and Prevention, the results were very similar. However, the CDC also looked at women who, on average, lost significantly more years.

Dr. Steven Grover, a professor of medicine at McGill University in Montreal, noted he and his team hope the findings will help improve patient-doctor relations.

"Appreciating the impact excess pounds has on our life expectancy and healthy years of life will hopefully provide health professionals with a new diagnostic measurement to motivate some individuals to make healthy changes to their lifestyle."

However, the findings are not an end-all, be-all of research on the issue — the only obesity-related illnesses that were considered were heart disease and type 2 diabetes.

This video includes images from Sophie Riches / CC BY 2.0 and Dennis Brekke / CC BY 2.0.