A Lot Of Marine Animals Eat Plastic ⏤ Now We Know Why 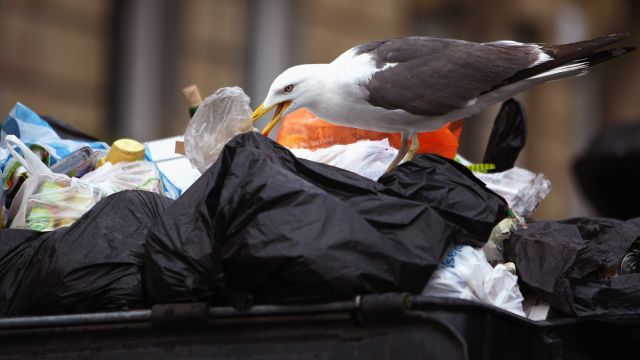 Over 700 species have been seen chowing down on plastic that has made its way into the ocean.

A lot of plastic ends up in our oceans every year, and animals love to eat it.

For a long time, scientists just assumed the animals ate the plastic because it looked like food. But it turns out, it smells like food, too.

SEE MORE: Our Oceans Are Littered With Trash — Here's How We Could Fix It

In fact, it smells so enticing that 90 percent of seabirds eat it right now. And by 2050, nearly all of them are expected to dine on it.

When algae coats plastic in the ocean, it gives off the same smell it would have if animals like krill were eating it. Since the birds like to eat krill, they're attracted to the smell of the algae.

It's not just seabirds that are eating plastic. Over 700 species have been seen eating it. And every year, over 100,000 marine animals die from it.

One of the big problems with plastic is that it doesn't decompose. Instead, it breaks down into smaller and smaller chunks as it's weathered by the elements.

SEE MORE: These Six-Pack Rings Feed Sea Animals Instead Of Trapping Them

When an animal eats those chunks, plastic can stay in the animal's system for a long time because its stomach doesn't break the plastic down.

This discovery could help make plastic safer for marine animals. But the bigger problem is still the amount of plastic — 8 million tons — that gets dumped into Earth's oceans each year.