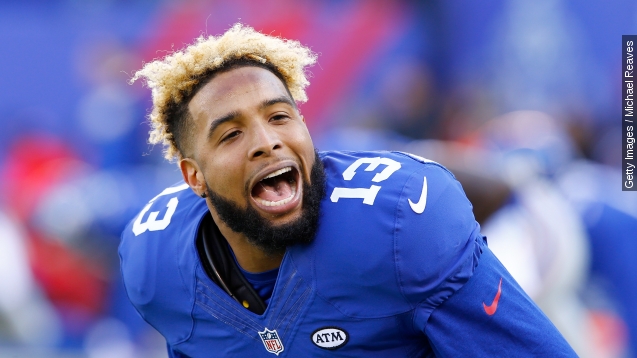 New York Giants wide receiver Odell Beckham Jr. lost his appeal and will serve his one game suspension this Sunday.

Beckham met with league officials Wednesday to try and have his discipline reduced after he was flagged for three unnecessary roughness fouls during his most recent game against the Carolina Panthers, mostly stemming from fights with cornerback Josh Norman.

Many analysts were shocked by the violent behavior from the emerging star wide receiver, who's appearing on this year's cover of "Madden." (Video via Complex)

"I have never seen a more malicious play in my 42 years around the NFL," NFL analyst Ron Jaworski said.

"These actions throughout this game, there's no place in the game for that," Ryan Field said on "Fox Sports Live."

"He embarrassed himself. He embarrassed the Giants. And frankly, Tom Coughlin did the same thing," Craig Carton said on "Boomer & Carton."

Despite the criticism, many Giants, including coach Tom Coughlin, stood up for their teammate after the game, saying that though his actions were wrong, Beckham was provoked before the game even started.

A Panthers player with a baseball bat on his shoulder was spotted antagonizing Beckham, and several Giants claimed some Panthers hurled gay slurs at the wide receiver during warmups.

But the NFL has been trying to reduce the number of helmet-to-helmet hits like the one Beckham delivered to Norman. He's also been fined for similar incidents in earlier games this season, which puts him in the repeat offender category. (Video via Lenovo)

But Beckham wasn’t the only one on the hook for the chippiness of Sunday’s game. Norman’s wallet will be $26,000 lighter thanks to some of his own antics during the game, including striking Beckham in the head.

The incident cost the Giants their top playmaker for a crucial match-up against the Minnesota Vikings; New York still has hope of making the playoffs this season. (Video via Head & Shoulders)

Just after the news of his suspension broke, Beckham tweeted an apology for his actions, saying he "dropped the ball on sportsmanship."