Officers Get New Partners In Effort To Decriminalize Mental Illness 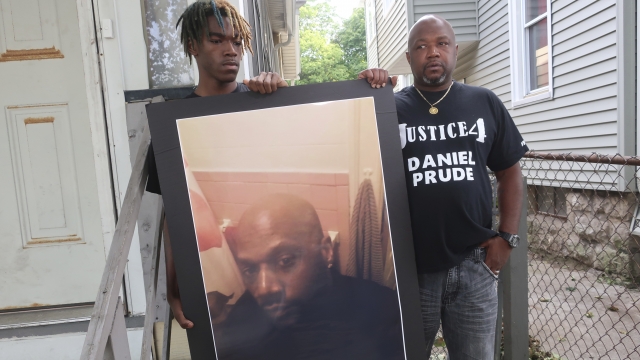 In Virginia police officers are now working with mental health clinicians to reduce deadly encounters between police and the mentally ill.

In 2020, the country was in the midst of a reckoning between officers and those they serve.

Deaths of people like Daniel Prude, who was in the midst of a mental health crisis, shined a light on police abuse and gaps in training.

Police officers are expected to be ready, no matter the situation.

"People were in crisis, and I didn't know how to handle them. I didn't understand them," said Lt. Heather Vance, of the Prince William County Police Department in Virginia.

But an idea is taking root across the country. Maybe there are certain situations where officers shouldn't be first on the scene — or on the scene at all.

Officer Adam Beard and Andrea Hess are part of a co-responder unit in Prince William County, Virginia, where some officers are paired with mental health clinicians.

"We want them to be as comfortable as possible while still having safety in mind," said Beard.

"87% of the calls that they go on do not end in custody," said Baxter.

"It's not just a police officer there to keep the safety under control. It's also the mental health clinician there to make sure that you get what it is that you need," she said.

The system is named after Marcus David Peters, a biology teacher killed by Richmond Police during what his family calls a mental health crisis.

Marcus Alert goes beyond co-responders, there’s the regional call center when a call comes into dispatch and 9/11 operators decide the severity of the mental health emergency. Level one and two calls are sent to a regional crisis call center who conduct additional assessment and offer physical and verbal support with no cops involved.

For level three or four calls, "if police are needed, our co-responder team would have a clinician there with them who can handle that," said Baxter.

There’s also the county’s usage of Smart 911, a nationwide app that allows users to create profiles letting dispatch know of any medical history in the home.

"You don't always remember everything that you need to tell the person on the phone. You're in crisis when you're calling. So this information is already on there without you having to recall it," said Vance.

One in four fatal police shootings involve people with untreated severe mental illness, according to the Treatment Advocacy Center.

One reason is the process. Having an officer bring a person to a healthcare facility is lengthy and requires admission from the facility.

"The officers are physically there with them. They're watching them go through this. Some people are handcuffed to gurneys in hospitals and we've had that up to 14 days," said Baxter.

"Officers are sitting with people in the emergency room who need help, who need treatment, but there's a lack of bed space and nowhere for them to go," said Vance.

Lisa Dailey, with the Treatment Advocacy Center, says this can result in the one thing advocates hope to avoid.

"You can kind of see how from the perspective of law enforcement, it becomes very appealing to arrest that person instead of bringing them for a mental health evaluation. Because you bring them to the jail or you drop them off your back out on the street," said Dailey.

"We're tasked with this very hard decision of there's nowhere for them to go, but we can't let them go home. And it for anyone who got into this business because you wanted to help people, this is a very frustrating time," said Baxter.

Dailey says the national bed shortage is one of the systemic mental health issues caused by a lack of funding.

"This population that has been inappropriately criminalized. You can't actually push it back into the behavioral health system until you have a system," said Dailey.

Ideally, that would be getting people help before a crisis.

And Baxter says that’s the goal.

"The hope is it gets stopped at dispatch and never even goes out to police, if that's the thing. And then also giving police a tool other than putting someone in their car and driving into a hospital," she said.