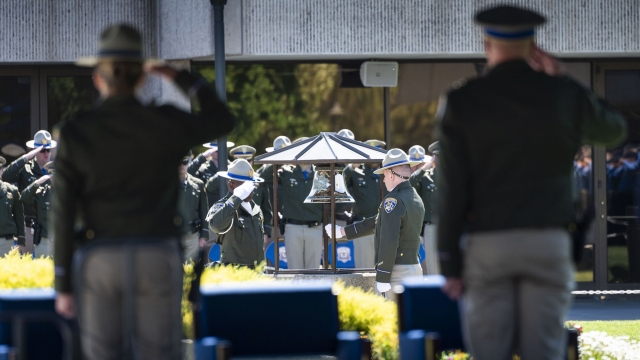 COVID was the leading killer of law enforcement officers in 2021, and violence also contributed to the staggering numbers.

In the past two years, crime and gun violence has spiked across the country, and hundreds of thousands have died of COVID. While the world collectively experienced the effects of both trends, law enforcement has often been on the front lines of both crises.

"No more excuses," Houston Police Department Chief Troy Finner said. "Everybody take an active role and get intentional about doing whatever you can do to fight gun violence in our city. Period."

As the summer approaches following two of the most violent years in recent memory, many police officers feel their job is more dangerous than ever.

Harris County Corporal Charles Galloway was killed during a routine traffic stop in January. The suspect fled but was eventually captured across the border in Mexico and brought back to Houston to stand trial.

Then just four days later, three HPD officers were shot during a car chase. All three officers survived the shooting.

"It's been a tough week for law enforcement in our city, and the two law enforcement officers that we lost, we continue to pray for them and their family as we plan for their funerals," Finner said.

Looking at all the ways officers died on duty in 2021, the National Law Enforcement Memorial Fund says last year was the deadliest for U.S. law enforcement in history with 458 total fatalities.

That's a 55% increase compared to last year and 146 more deaths than the previous record year.

"I think that number surprised everybody," Troy Anderson said. "I mean, quite frankly, that's a staggering number."

Anderson is the executive director of safety and wellness for the National Law Enforcement Memorial Fund and a retired police sergeant.

"There are no hostages in policing, people come into police work because they want to do better, they want to leave it better than they found it," Anderson said. "They believe in the core values of what this is, but they didn't sign up to die. Nobody signed up to die."

In New York, two young officers were shot and killed responding to a domestic violence call.

"New Yorkers feel as if a sea of violence is engulfing our city, but as your mayor, I promise you, I will not let this happen," New York City Mayor Eric Adams said. "We will not surrender our city to the violent few."

COVID was by far and away the leading killer of law enforcement officers in 2021, and that trend has continued into this year.

"We don't really think of COVID being the line of duty, but these guys through the entire pandemic put themselves in harm's way by going into houses, going to car accidents," said Lawrence Township Police Chief David Brown.

In addition to the threat of being killed, officers also face serious non-lethal attacks and exposure to trauma. The FBI says in 2020 some 60,000 officers were assaulted — that includes being punched, kicked and stabbed as well as being shot. That was about 4,000 more than the previous year.