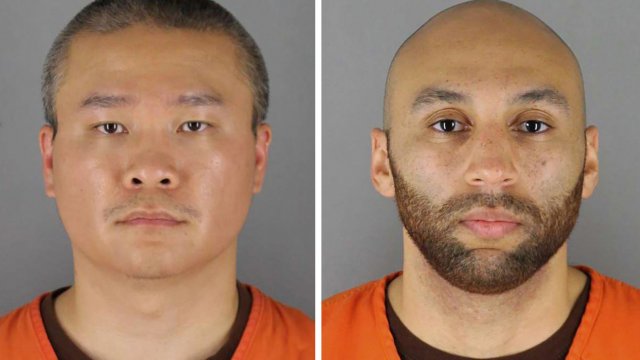 The sentencings mark the latest chapter in the search for justice following George Floyd’s fatal arrest more than two years ago.

Two former Minneapolis police officers have been sentenced to prison for their roles in violating the civil rights of George Floyd during his fatal arrest in 2020.

Bodycam video from the arrest in May 2020 shows Kueng pinned Floyd’s back as Chauvin fatally knelt on Floyd’s neck. Thao kept a crowd of increasingly angry bystanders back.

Kueng and Tao still face state prosecution but in February were convicted on federal charges of “deliberate indifference” and “failure to intervene” as officers to stop the killing of Floyd.

Tao argued during his trial he was serving as full-time crowd control and never touched Floyd. Kueng testified he thought Floyd was on drugs and delirious.

Prosecutors had argued that if either officer had acted to stop Chauvin, Floyd would be alive.

Earlier this month, Chauvin was sentenced to 21 years in federal prison to run concurrently with a 22.5-year state sentence he received last year for murder and civil rights violations.

Ex-Cop Chauvin To Get Federal Sentence For Floyd's Killing

Former Minneapolis police officer Derek Chauvin is about to learn his sentence for federal civil rights violations in the killing of George Floyd.

Lane, the fourth officer on the scene, has been sentenced to two and a half years in federal prison.

Kueng did not speak during the hearing, but Thao did, citing several Bible verses and complaining of false accusations.

Floyd’s girlfriend Courtney Ross and a cousin of his both spoke of the loss of their loved one.