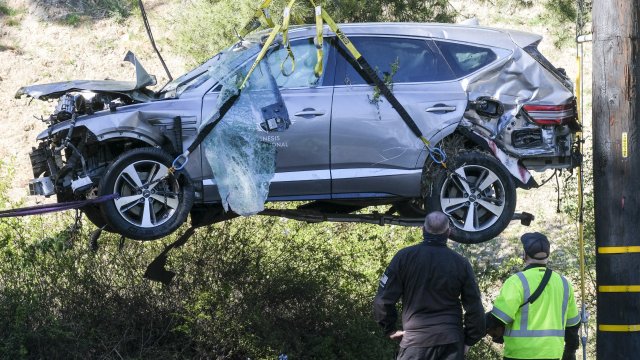 Officials say Woods was driving roughly 40 miles over the speed limit, golfer may have hit gas instead of brake.

Officials say Tiger Woods was driving nearly 40 miles per hour over the speed limit in February near Los Angeles before he veered off the road, hit a tree and flipped over.

The posted speed limit for the road is 45 miles per hour. However, officials say they won't give Woods a citation.

"Part of it was the circumstance he endured during the collision and in order to issue a citation, usually you need something to indicate an independent witness or an observation from a peace officer," said Capt. James Powers of the Los Angeles County Sheriff's Department.

Investigators examined a data recorder from inside the vehicle. They believe Woods may have hit the accelerator mistakenly, instead of the brake.

"We don't know that. He doesn't have any recollection of the incident. And like I said that is a speculation. There is zero braking on the data on the data recorder and 99% acceleration on the pedal," James said.

One of the lingering questions: whether Woods was distracted while driving. Police decided not to even try to find out. They didn’t check his phone.

"It's not going to change anything. The cause of the collision was the speed, an inability to maintain the road way. And so all it would have been is an associated factor, which wouldn't have caused the collision," Powers said.

Investigators stressed the golfer wasn't under the influence and didn't find any substances or open containers in the vehicle. They defended their decision not to test Woods.

"Due to his injuries and the traumatic nature of his injuries, it would not be appropriate to do any field sobriety test," James said

They explained there was no probable cause to get a blood sample and his history of prescription drug use was not enough for a search warrant. The L.A. County Sheriff insists Woods didn't receive any special treatment.

"The decision not to issue a citation would be the exact same for anyone in this room who went through the same situation-- solo collision. No witnesses. Infraction only. We're not going to issue a citation that wasn't in the peace officer's presence. Period," Villanueva said.