Officials Give An Update On The Yellowstone Flooding 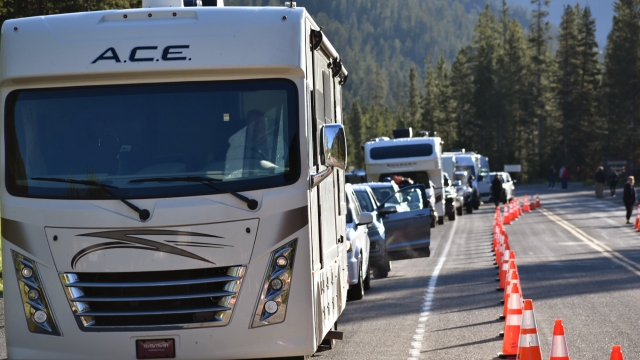 Visitors are now able to enter Yellowstone National Park again, after flooding shut down the park for more than a week.

The night before the world’s first National Park reopened, people on the quiet streets of west Yellowstone weren’t sure what to expect after unprecedented flooding shut down the park for more than a week.

But it didn’t take long to see a different kind of torrent early, Wednesday morning, a flood of cars were anxious to get through the gates at West Yellowstone.

Park officials say this is typically the busiest park entrance. We got here at 6:30am, and it took 6 hours to clear out the line of vehicles waiting.

The park closed June 13 when devastating flood waters washed out roads, bridges and multiple wastewater treatment facilities.  It initially wasn’t clear when the park would reopen, but officials made a plan focusing on the southern loop with hopes to open up to 80% of the park within the next two weeks.

"It’s one of the busiest times of the year. I know there were a lot of people who are disappointed, so we worked really hard to come up with this plan — it was actually an idea that was presented to us from members of the gateway communities," she said.

Last June, the park saw nearly a million visitors. This year, to avoid congestion from the partial reopening, it implemented a license plate system, which allows cars with a license plate ending in an even number on even dates — and odd numbers on odd dates.

"There's going to be evaluating all day long just to see you know, how it's working. If we need to make any tweaks, this is something very new for us," Veress said.

If that doesn’t work, the park may move to a reservation system, but people who work in this summer gateway destination hope it doesn’t come to that.

"It would just choke us, it would really limit the number of people that would be able to come through here when we’re capable of handling so much more," a shop manager said.

Only three of the park’s five entrances opened Wednesday, and while lines stretched for miles in west Yellowstone, several other surrounding communities are cut off.

And tourists are resorting to plan B.

The northern gate at Gardiner, Montana will stay closed for at least this season, which locals fear will devastate the economy. But this greater Yellowstone community hopes people continue on with vacation plans, even if they’re a modified version, to keep these towns running.

The "one-of-a-kind theme park, unlike any other in the world," will be in Frisco, and specifically designed for families with young children.

By Universal Parks & Resorts via AP
0:40